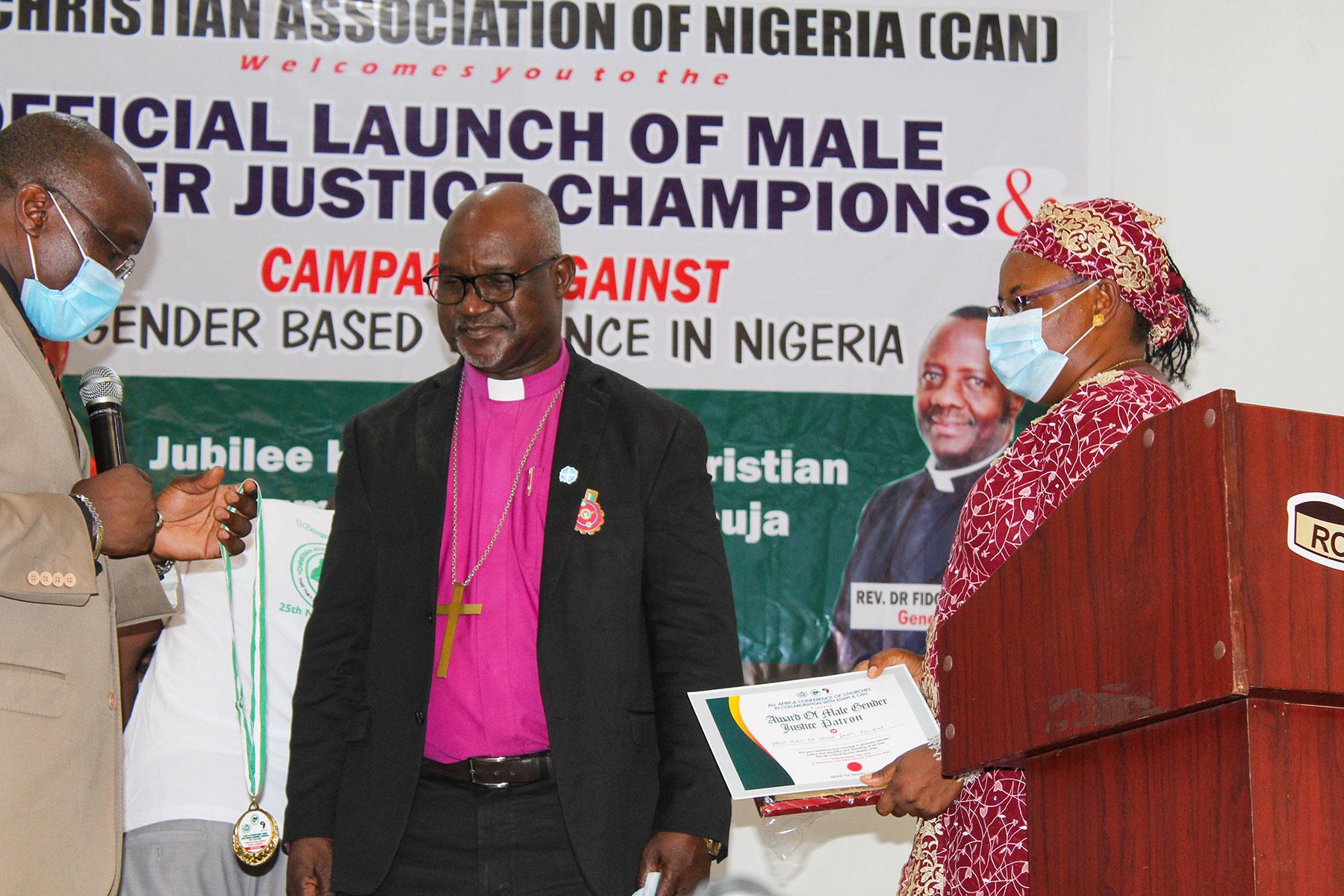 (LWI) – The Lutheran World Federation (LWF) President Archbishop Dr. Panti Filibus Musa has received the "'Patron of Gender Justice Champion in Africa" award for his leadership "in the fight against gender-based violence and all forms of injustices against women."

The All Africa Conference of Churches (AACC) presented the award on 10 December in Nigeria's capital Abuja, concluding this year's 16 days of activism against gender-based violence (GBV), co-hosted by the Christian Association of Nigeria. The Lutheran Church of Christ in Nigeria (LCCN), which Musa heads, and the LWF are among other organizations advocating for gender justice during the 16 days campaign and within their programmatic work activities.

"We cannot afford to be part of the conspiracy of silence. As a church, we must speak out," stated AACC General Secretary Rev. Dr. Fidon Mwombeki. The award was presented on his behalf by Rev. Dr. Lesmore Gibson Ezekiel, AACC director for Peace, Diakonia, and Development.

Collaboration at all levels

Receiving the award, Archbishop Musa said it was essential to address GBV not solely from an organizational level but also at the family level. "Adressing gender is a responsibility, and we are being challenged and inspired to do more," he noted. "We are obliged to acknowledge the problem and seek solutions from all levels."

Addressing gender-based violence is a responsibility and we are being challenged and inspired to do more.

Some of LWF's 31 member churches in Africa are affiliated to the AACC. Musa noted LWF's encouragement to its member churches globally to play an active role in promoting gender justice in society has been particularly important during the COVID-19 pandemic. "The pandemic has aggravated gender-based violence in the world, which signals the need to engage more to bring hope for victims and their families and help reduce the rate of perpetration. This fight is about transforming the hearts of men and women," he added.

Collaboration and consistent effort beyond the annual campaigns are also necessary, Musa said. "It is good to gather once in a while, but we need to go out so that we can bring this to the real people. It has to be sustained not by hosting events alone but also in homes and schools and peer groups because the formation is very critical."

Reflecting on the place of men and women in African societies, the Nigerian Lutheran church leader emphasized the need to support policies that promote gender justice and women's rights in Africa. "We have to review how gender justice is viewed in many contexts, and to look at men and women as both created in the image of God," he said.

Referring to the misuse of religion to discriminate against women, the LWF president noted that the fight for gender justice must involve churches and other faiths. "It is dangerous to keep quiet on such a critical issue at this time," Musa added.

By Felix Samari, ALCINET coordinator, for the LWF. Edited by LWF Communications

Founded in 1963, the All-Africa Conference of Churches (AACC) is the largest association of Protestant, Anglican, Orthodox, and Indigenous churches in Africa. It is a member of the worldwide ecumenical network. The Nairobi (Kenya)-based AACC comprises 193 member churches, National Councils of Churches, theological and lay training institutions, and other Christian organizations in 42 countries on the continent. It is led by General Secretary Rev. Dr. Fidon Mwombeki, an ordained pastor of the Evangelical Lutheran Church in Tanzania.