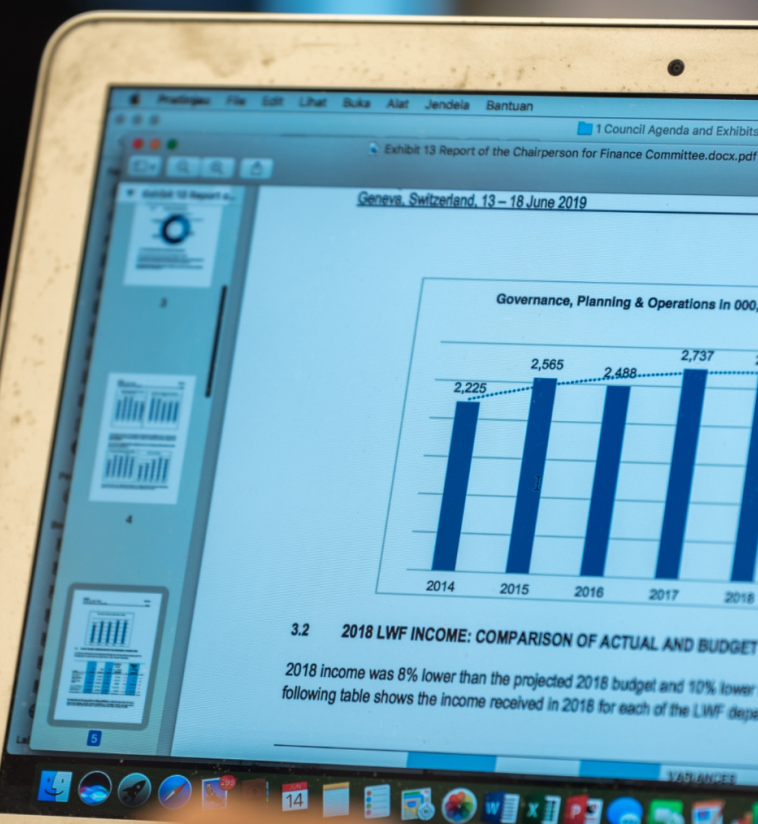 Advocacy for peace and expressions of solidarity with the people and churches of Ukraine following Russia’s invasion, marked the first quarter of The Lutheran World Federation’s (LWF) work in 2022. The LWF’s increased response together with its member churches will ensure refugees and internally displaced people get immediate and long-term support.

Highlights in 2021 include a major leadership transition: General Secretary Rev. Anne Burghardt assumed office last November. Innovative ways of responding to new challenges in the uncertainty of the COVID-19 pandemic led to synergies between programs and departments and increased contacts with churches. Key activities included funding of rapid response projects, new humanitarian interventions, support to the new hub for advocacy, and preparations towards the Thirteenth Assembly in 2023.

In 2021, when many parts of the world were still highly impacted by the COVID-19 pandemic, The Lutheran World Federation (LWF) Communion Office continued to build on innovative ways of implementing its work in close collaboration with the member churches and partners, in order to bear witness to Christ even in these challenging times.

Key initiatives included funding of rapid response projects, increased humanitarian intervention, response to several conflicts around the world that require attention, and support to Action for Justice, the new hub for advocacy.

In 2021, LWF’s member churches implemented 181 projects as rapid response initiatives to the COVID-19 pandemic, assisting tens of thousands of the most vulnerable people in 53 countries. During the same period, LWF’s international humanitarian and development work reached nearly 2.5 million people.

In the first quarter of 2022, LWF engaged in advocacy for peace and expressions of solidarity with the people and churches of Ukraine following Russia’s invasion in February 2022. LWF is scaling up a response to assist people who have fled their homes and are seeking safety in Ukraine, Poland, Slovakia, Hungary and Romania, but also in many other countries in the region. When responding to this largest humanitarian crisis in Europe since World War II, the LWF wants to make sure that one does not forget the people who are suffering in conflict areas elsewhere in the world. The goal is to ensure refugees and internally displaced people get immediate and long-term support, which will be delivered by the LWF as well as its member churches.

One of the major tasks in 2022 will be preparations for the 2023 Assembly along with new initiatives, such as marking the 500th anniversary of Martin Luther’s translation of the New Testament.

In June, the Council elected Rev. Anne Burghardt, a theologian and pastor from the Estonian Evangelical Lutheran Church as LWF General Secretary. Rev. Dr Martin Junge, Evangelical Lutheran Church in Chile, who had led the communion since 2010 left office on 31 October. Burghardt, the first woman to hold this position, and the first person from the Central Eastern Europe region, took office on 1 November 2020. She was installed on 17 November in a celebratory worship service at the Ecumenical Center Chapel, which was also streamed online. LWF President Archbishop Dr Panti Filibus Musa presided at the service.

With Passion for the Church and for the World

The LWF Strategy 2019-2024, titled With Passion for the Church and for the World, guides the work that member churches undertake jointly as a global communion in implementing different aspects of God’s holistic mission. The long-term strategic priorities to support churches and their vibrant witness in the world and to promote human dignity, justice, and peace provided a solid basis for operational plans and activities that responded to new challenges and achieved the set objectives and expected results.

When the in-person regional conferences and workshops could not occur, there was an increased number of online meetings across several programmatic areas, leading to more intense contact and collaboration with member church representatives and ecumenical officers.

The Communion Office shared prayers, liturgy or scripture messages and letters with the church leaders. Financial assistance through the member church projects’ portfolio facilitated the purchase of communication equipment, face masks and sanitizers to support worship activities. Churches also prioritized advocacy, and distributed food and other basic items to people in need.

Since November 2021, more frequent regional online meetings have also been initiated between the General Secretary and the Council members and advisors. Regional Secretaries continue to accompany member churches in all regions, and to bring concerns from different churches and countries to the attention of the global communion.

A new LWF Advocacy Framework was developed as a basis for LWF’s advocacy work. At the UN Human Rights Council, it was encouraging to witness the approval and recommendation for government action most of the Universal Periodic Review recommendations by LWF’s member churches in Namibia and Sierra Leone. LWF organized the annual training on advocacy for women’s human rights, focusing on strengthening advocacy, networking and collaboration at the local and regional levels. The LWF delegation of 32 young people at COP 26 was the largest ever since youth started representing the communion at the 2011 climate conference. Some travelled to Glasgow, and all joined meetings online, and complemented LWF’s advocacy with local initiatives.

LWF World Service, together with its partners, reached an estimated 2.5 million people in need. In the face of escalating violence and conflict, LWF responded to ensuing humanitarian crises in Ethiopia, Myanmar and Venezuela. In Haiti, natural disasters—an earthquake and a tropical depression—on top of deteriorating insecurity were the key priorities. LWF continued to support Rohingya refugees from Myanmar through its former country program RDRS (Rangpur Dinajpur Rural Service). In an initiative for people affected by the Syrian conflict, LWF provided shelter, non-food items, food security, water sanitation and hygiene (WASH), protection, psychosocial support and education. The decentralization of World Service operations through its country and regional offices and the efficient cooperation between the emergency hubs and these offices pays off. Staff at the national and grassroots levels sustained various activities during a period when international staff could not travel to their respective workstations.

Towards the Thirteenth Assembly

Assembly preparations are on track including work on Assembly publications. A resource, One Body, One Spirit, One Hope was published to introduce the assembly theme and encourage the member churches to get involved. Meetings of the respective committees responsible for developing the study content and worship materials, and local hosting took place online and on-site in Krakow. The host Evangelical Church of the Augsburg Confession in Poland has a strong commitment to participate in preparations through the Local Assembly Planning Committee. The 2023 Assembly web site was launched.

Synergies between departments and programs

Interdepartmental and inter-program collaboration increased, thanks to both the swift updates to online working tools and platforms and greater participation possibilities in webinars on various topics. In the ongoing process to describe contemporary Lutheran identities, member churches were invited to participate in a survey exploring views about baptism, beliefs, and liturgical practices in the dialogue between faith and life. A process was also launched to study experiences of women in the ordained ministry in order to remove barriers and affirm the way forward.

The launch of the Hélène Ralivao Fund for women in theology and leadership in the African region and beyond, including scholarships and resource development, was a milestone for LWF’s commitment to gender justice and women’s empowerment. The Theological Education and Formation Network remains an important platform for strengthening the connection between teaching institutions and the member churches.

Development of a Guidance Note on the joint engagement of LWF member churches and the country programs affirmed collaboration between the Departments for Theology, Mission and Justice and World Service. New potential for joint work at the local level was echoed at the online regional meetings for Africa, Asia and Latin America and the Caribbean.

A communion solidarity fund for support in challenging times
news

A Singing Communion in Advent 2022
news