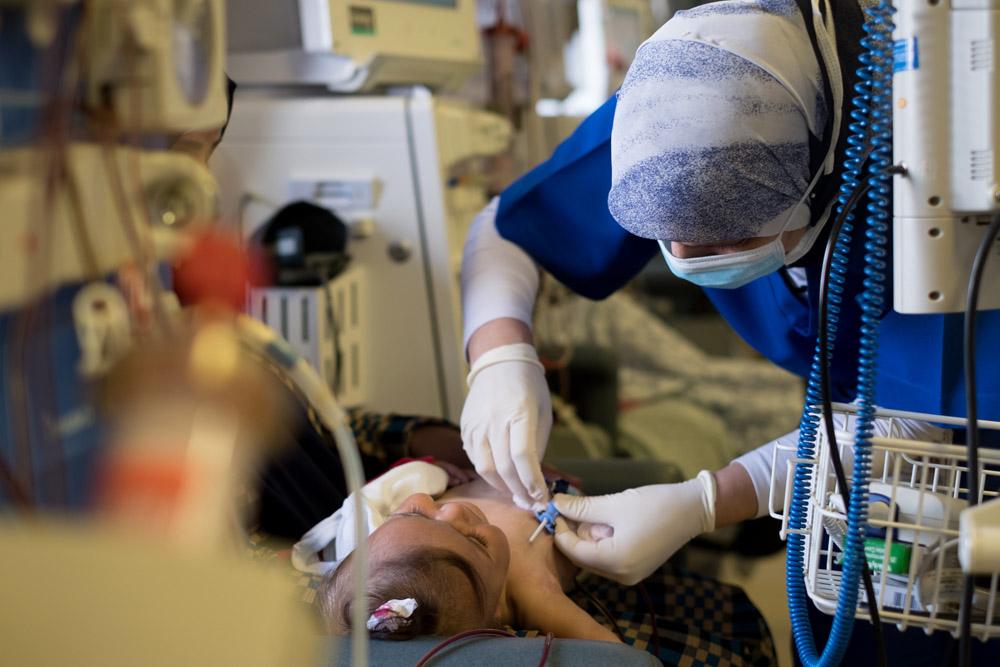 A doctor treats a child at AVH. Photo: LWF/ B. Gray

"Critical to ensure ongoing, lifesaving treatment for patients from the West Bank and Gaza"

The Lutheran World Federation regrets the decision by the US administration, reported by several news agencies, to cut its funding for the six East Jerusalem Hospitals. According to a budget approved by the US Congress, the hospitals in East Jerusalem, including the Lutheran World Federation’s Augusta Victoria Hospital (AVH), were budgeted to receive USD 25 million in funding during financial year 2017 to cover costs for patients referred by the Palestinian Ministry of Health. Today’s news reports come following a policy review by the US administration that resulted in several funding cuts affecting people in the West Bank and Gaza.

The funding to the East Jerusalem Hospital Network is critical to ensure ongoing, lifesaving treatment for patients from the West Bank and Gaza.

Overall, AVH is owed over USD 38 million while the total owed to the six East Jerusalem hospitals, including AVH, is over USD 80 million making the situation of the hospitals unsustainable. In March 2018, the US Congress passed the Taylor Force Act to strengthen restrictions on aid to the Palestinian Authority in annual appropriations. A specific exemption was made to protect funding to the six East Jerusalem Hospitals.

In his first reaction, Rev. Dr Martin Junge, General Secretary of the Lutheran World Federation, said: “The funding to the East Jerusalem Hospital Network is critical to ensure ongoing, lifesaving treatment for patients from the West Bank and Gaza. We call on the US Administration and the US Congress, in the spirit of the exemption introduced in the Taylor Force Act, and the international community to urgently address this critical situation to ensure that the lifesaving treatments can continue uninterrupted.”

“The United States has made a significant investment in enabling medical care for the Palestinian people through the Augusta Victoria Hospital. We have strong support from the churches and the people of the United States. Collectively, we will continue to work hard to regain the US government support,” said Rev. Dr Junge.

Augusta Victoria Hospital is a center of medical excellence in East Jerusalem, serving all 5 million Palestinians in the West Bank and Gaza. It offers specialized care not available in other hospitals in the West Bank and Gaza, including radiation therapy for cancer patients and pediatric hemodialysis. Augusta Victoria Hospital is accredited by the Joint Commission International for its outstanding quality.