Plea from faith leaders: Save our common home 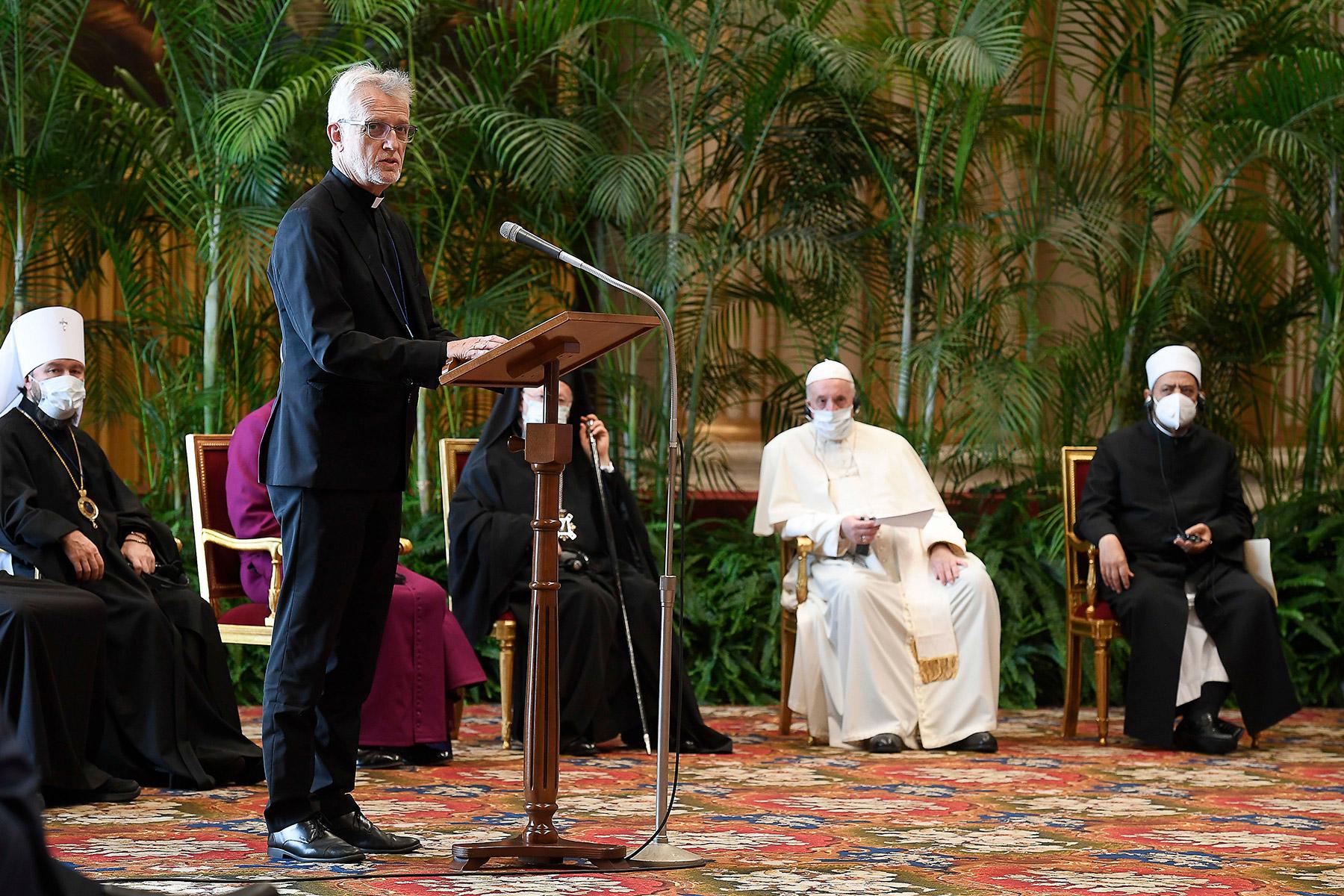 (LWI) - “We have inherited a garden: we must not leave a desert to our children.” That stark warning was at the heart of a joint appeal from leaders of all the world’s religious communities who gathered in the Vatican on 4 October, ahead of the COP climate summit due to open in Glasgow at the end of the month. The appeal highlights the consensus among scientists that urgent action is needed to limit the rise in the earth’s temperature to 1.5 degrees, in order to avert a climate catastrophe.

The Lutheran World Federation (LWF General Secretary Rev. Dr Martin Junge and Presiding Bishop Dr Frederick Shoo of the Evangelical Lutheran Church in Tanzania (ELCT) were among the 40 faith leaders from around the globe who joined Pope Francis in signing the appeal to governments and decision makers, urging them to take more ambitious action and cooperate more effectively to reduce global warming.

The encounter, entitled ‘Faith and Science: Towards COP26’, was the culmination of months of online meetings between the religious leaders and top climate scientists. The event was organized by the Vatican, in partnership with the British and Italian embassies to the Holy See, with the goal of mobilizing faith communities around the world. It included a symbolic tree-planting ceremony, as each religious leader added a handful of earth to an olive tree, to be planted in the Vatican gardens.

Speaking on behalf of the global communion of Lutheran churches, Junge said the joint appeal sends a clear message that “people of good will from every sector of society can unite, can act, can work together now.” Just weeks away from COP26, he said, “we are together in our call to the community of States: ensure that emissions are substantially reduced, protect and support the vulnerable.”

Building on its long-standing commitment of care for creation, Junge said the LWF pledges to equip member churches “with the spiritual and theological resources to inspire action to address climate change and to support communities affected by climate related disasters.” Furthermore, he said, the LWF commits to “deepen existing ecumenical and interfaith cooperation” and to “amplify and promote the voices of youth, and support church leaders to advocate for climate justice.”

Bishop Shoo from Tanzania, invited because of his pioneering work to combat climate change, noted that he has been nicknamed ‘the tree bishop’ on account of his efforts in mobilizing local communities to plant trees on the slopes of Mount Kilimanjaro. He recalled Martin Luther’s words: “Even if I knew that I would die tomorrow, I would plant a tree today,” adding that it is now required of all children attending confirmation classes to plant trees and to learn about the climate crisis. He concluded with a plea to government leaders: “Let us save our common home, before it is too late.”

Moral obligation to care for creation

The joint appeal was signed by Christian leaders from Orthodox, Catholic, Anglican, Protestant and Reformed traditions, alongside representatives from Jewish, Muslim, Buddhist, Sikh and Jain faith communities. Other religious leaders, who were unable to attend the meeting, sent video messages, while the gathering also heard from a young Italian woman, Federica Gasbarro, representing delegates from a Youth for Climate meeting that took place in Milan the previous week.

The statement was handed by Pope Francis to British politician Alok Sharma, who is serving as President of the COP26 summit and to Italian foreign minister Luigi Di Maio. The UK and Italy are co-hosting the summit in Glasgow from 31 October to 12 November. The LWF will be represented at the meeting by a delegation of young climate activists from different regions, alongside its experts on Climate Justice, Youth and Global Advocacy.

The appeal highlights the interdependency of people and the planet, stressing the need for “deeper solidarity in the face of the global pandemic” and growing climate crisis. It notes that the poorest people, especially women and children in the most vulnerable countries, are worst affected by the crisis and calls for a change to the current narrative of economic development. “We are not limitless masters of our planet and its resources,” the statement says. “We are caretakers of the natural environment with the vocation to care for it for future generations and the moral obligation to cooperate in the healing of the planet.”

Season of Creation 2021: “Challenge the world to care for all creation”
news