LWF calls for health care without discrimination for Palestinians in Gaza 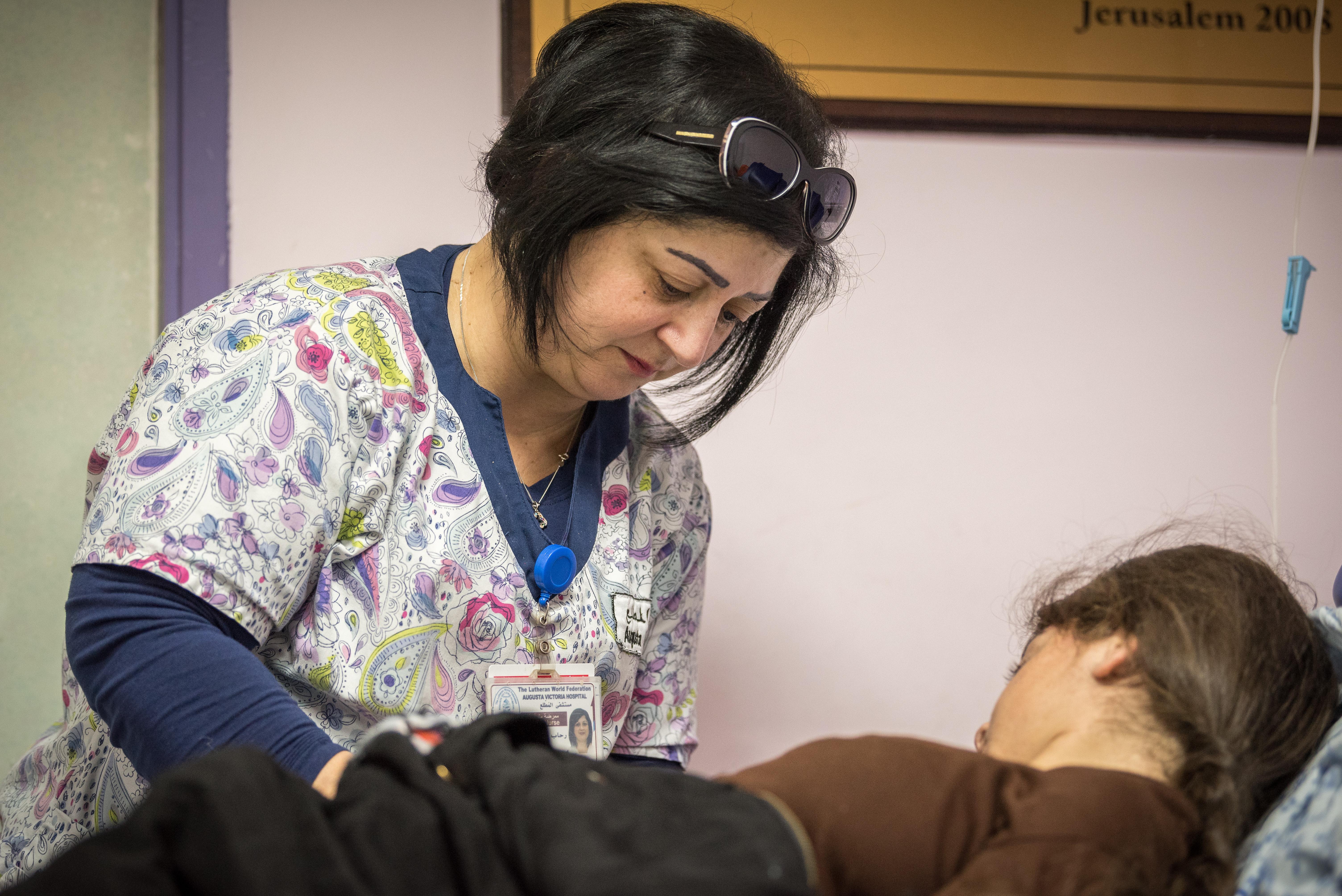 Rihab George, senior nurse in the outpatient unit of the Augusta Victoria Hospital, disconnects a bag of antibiotics from a child patient. The hospital offers specialized treatment to Palestinians which is not available to them elsewhere. Photo: LWF/Albin Hillert

(LWI) - The Lutheran World Federation (LWF) is again raising the alarm on the difficult health care situation for Palestinians living in the Gaza strip. LWF has signed onto a statement with, the Association of International Development Agencies (AIDA), calling upon the local authorities to reinstate the health coordination mechanism for critically ill patients to access treatment outside the Strip, and bolster the provision of supplies to Gaza hospitals.

On 19 May, the Palestinian authority stopped all cooperation with the Israeli government authorities, when Israel announced their plans to unilaterally annex parts of the West Bank.*

The halt of coordination between the two government bodies directly impacted the health referral system that Gazans rely on for life-saving medical treatment unavailable in the Gaza, such as oncology and complex surgery. Three people, including two infants, have died because they were not allowed to travel for medical treatment in time.

LWF, which manages the Augusta Victoria Hospital in East Jerusalem, has repeatedly raised awareness about the situation of especially children seeking treatment. Augusta Victoria hospital offers specialized treatment in nephrology and child oncology, including radiation therapy, which is not available in Gaza.

Receiving a medical permit to exit the Gaza Strip and accessing healthcare at the Augusta Victoria Hospital, appears nearly impossible in light of the current events.

“Receiving a medical permit to exit the Gaza Strip and access healthcare at the Augusta Victoria Hospital, appears nearly impossible in light of the current events and the Palestinian Authority halting security coordination with Israel,” says Sieglinde Weinbrenner, LWF country representative in Jerusalem.

The reason is twofold: On one hand, the Palestinian authority no longer facilitates the permit requests. A non-governmental organization, Physicians for Human Rights, has taken over that role, but with much less resources.

Secondly, of the already dramatically reduced number of submissions, even less are approved than before. Only about 30 percent of the requested permits were granted in the past two months. Last year, the approval rate was at 73 percent. According to WHO’s reports, 1,641 patients in Gaza were able to leave the Strip for medical treatment outside in January 2020. In June, only 119 exited – an alarming 93 percent reduction.

Together with the Association of International Development Agencies (AIDA), LWF has issued a statement in early September, calling upon the local authorities to end all “collective punitive measures” against the civilian population of the Gaza Strip, to reinstate the health coordination mechanism for critically ill patients to access treatment outside the Strip, and bolster the provision of supplies to Gaza hospitals.

AIDA also urged local authorities to cooperate in order to “prevent the spread of COVID-19 in Gaza, and urged the international community to “publicly assert” that the response to COVID-19 needs to be “based on international human rights law and equality of access to health service”.

AIDA represents 84 humanitarian and development organizations operating in the occupied Palestinian territory and Israel, such as Action Against Hunger, World Vision, Oxfam, Save the Children and Amnesty International.

WHO steps in temporarily

The measures hit those who are already suffering. Health care in Gaza was never sufficient, a situation that has been exacerbated by the COVID-19 pandemic. The strip has been under a strict lockdown since the first COVID-19 cases were recorded in July. The World Health Organization (WHO) has reported that Gaza’s hospitals, which serve a population of two million, currently have capacity for only 350 Covid-19 patients.

Meanwhile, the United Nations have stepped in. According to a recent announcement, the World Health Organization will temporarily facilitate exit permits for Gaza medical patients and companions.

LWF Jerusalem country representative Sieglinde Weinbrenner is cautiously optimistic. “Although a temporary solution has been found, the current policy of the Government of Israel to restrict the movement of patients has to be reviewed”, she says. “It is necessary to ensure the patients right to health according to human rights and international humanitarian law.

*(In a former version of the article we wrongfully claimed that Israel also announced its intent to annex the Gaza strip. This mistake has been corrected.)

LWF World Service runs the Augusta Victoria Hospital, a center of medical excellence in East Jerusalem, serving all 5 million Palestinians in the West Bank and Gaza. It offers specialized care not available in other hospitals in the West Bank and Gaza, including radiation therapy for cancer patients and pediatric hemodialysis. It also has vocational training centers in the West Bank towns of Ramallah and Beit Hanina. The LWF is also present in the region through The Evangelical Lutheran Church in Jordan and the Holy Land, an LWF member church.

Together for human rights in Africa
news
ttt