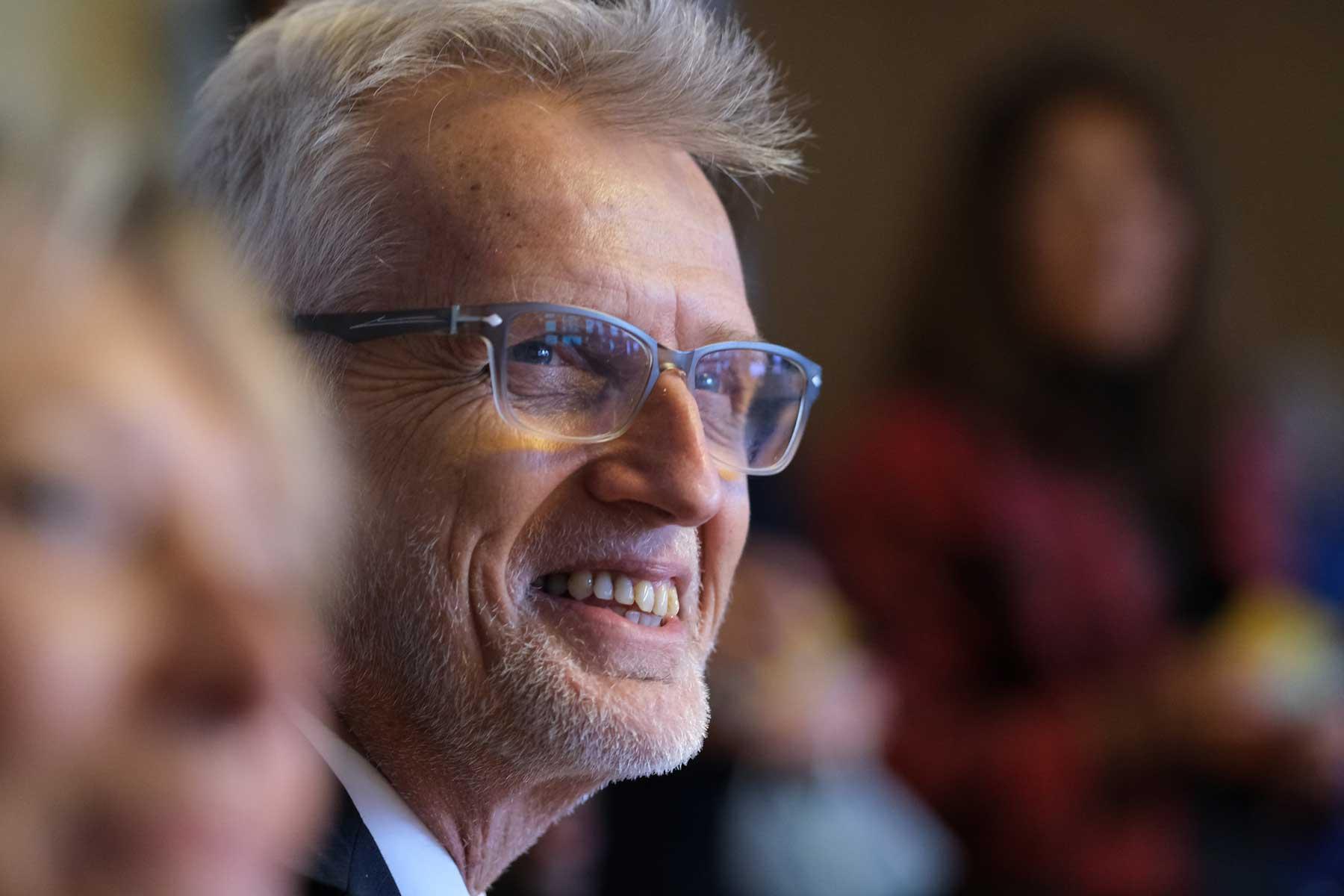 LWF leaders, staff and representatives of member churches gather in person and online for thanksgiving service

(LWI) - Members of the Lutheran World Federation (LWF) from all parts of the globe gathered online and in person, in the chapel of Geneva’s Ecumenical Center, on 28 October for a service of farewell to General Secretary Rev. Dr Martin Junge, who concludes his term of office at the end of this month.

Speaking online from his native Nigeria, LWF President, Archbishop Dr Panti Filibus Musa offered his “deepest gratitude” to the outgoing General Secretary on behalf of the global communion of 148 member churches. Over the past two decades of service in different roles, he said: “I have witnessed firsthand your love for the Gospel, church and communion, your commitment to dialogue, justice and peace - gifts which you have offered to the communion, enabling it to witness and work for justice, peace and reconciliation.”

LWF’s Vice President for the Nordic region, Archbishop Dr Antje Jackelén led the service which included an Affirmation of Baptism and Christian Vocation. Readings and prayers in many different languages were interspersed with songs from all seven regions of the worldwide communion. Leaders of other Christian communions were also present for the celebration, including the World Council of Churches, the World Methodist Council, the Mennonite World Conference and the Salvation Army.

I have been blessed in so many respects, not least by the privilege to be exposed to the life of Lutheran churches all over the world.

Addressing Junge during the liturgy Jackelén said: “The LWF called you to be its General Secretary, to lead it in faithful proclamation of the Gospel and in advocacy and service for the neighbor, to guide it on the journey ever-deeper into communion. You have been faithful in your call. You have shared the joys of the communion, you have carried its struggles as the LWF witnesses to God’s mission in the world. On behalf of the LWF Council representing all the member churches, I share our thanks, our deep gratitude for you and your call.”

Ahead of his departure, Junge said it had a privilege and honour to serve the LWF as its General Secretary. “It has been an immensely rich time, and I have been blessed in so many respects, not least by the privilege to be exposed to the life of Lutheran churches all over the world. I cherish unforgettable memories from visits to member churches and continue to give thanks for each of them and for how they contribute in their own ways to witness to the good news of God’s liberating grace in Christ.”

Regional farewell services and celebrations also took place in different parts of the communion, with church leaders gathering both online and in person to give thanks for Junge’s leadership over the past eleven years. In particular, participants expressed heartfelt gratitude for his emphasis on Lutheran identity and mission, his empowerment of women and young people, as well as his accompaniment of member churches, especially during challenging times.

Junge, a former president of the Evangelical Lutheran Church in Chile, was the first Latin American to hold the post of General Secretary of the LWF. He was elected by the LWF Council, taking office on 1 November 2010 and was appointed by the Council for a second term in 2017. He is succeeded by Rev. Anne Burghardt from the Estonian Evangelical Lutheran Church, the first woman and the first person from the Central Eastern European region to hold the leadership position.

Photos from the farewell service

LWF leaders: ‘Now is the time to be church’
news

A source of hope towards Christian unity
news