Growing as a communion engaged with the world 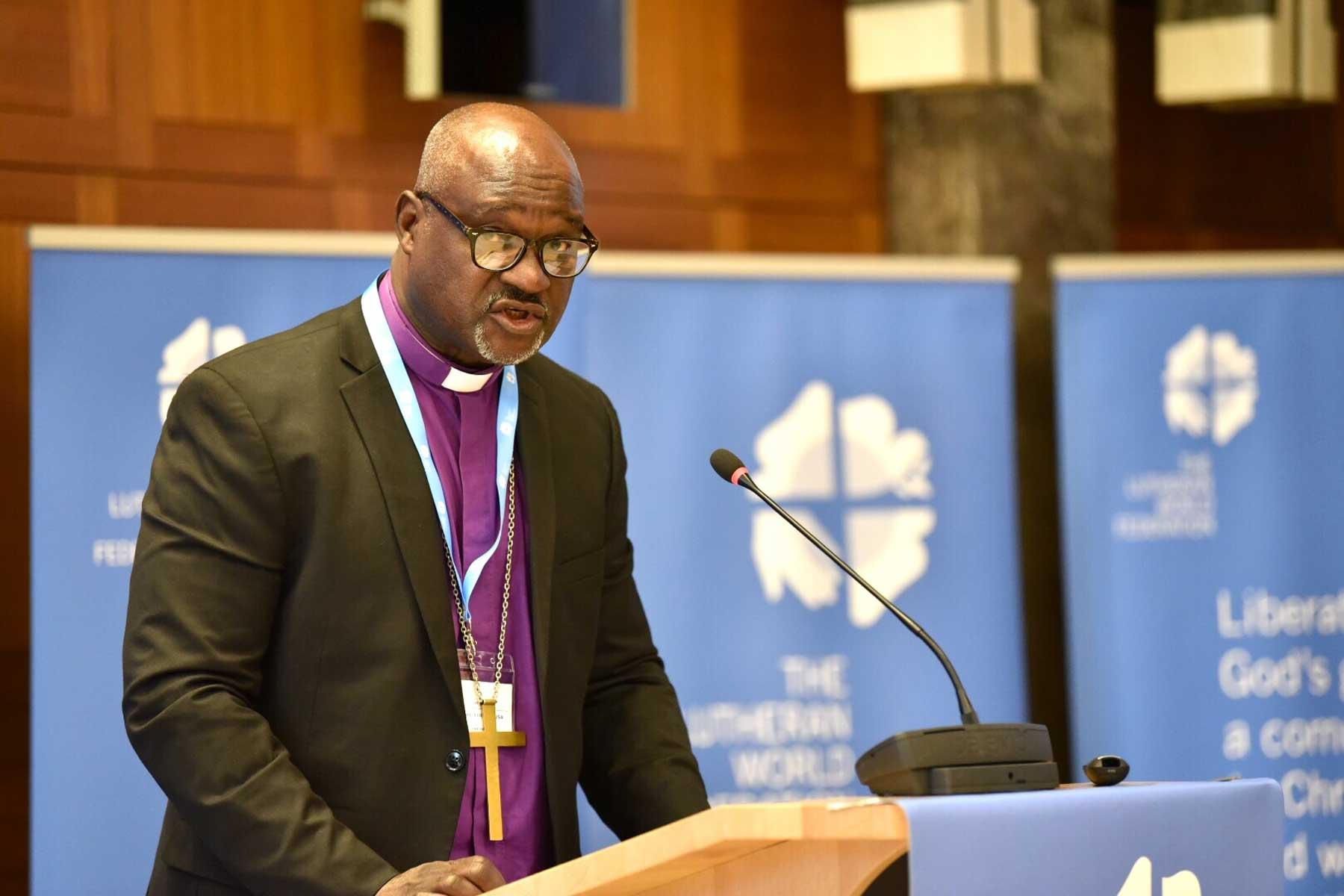 LWF President Archbishop Dr Panti Filibus Musa examined the significance of the Twelfth Assembly and the Reformation anniversary in his address to the 2018 Council. Photo: LWF/Albin Hillert

(LWI) - Lutheran World Federation (LWF) President Archbishop Dr Panti Filibus Musa opened his address to the LWF Council today by reflecting on the Twelfth Assembly and the Reformation anniversary, and outlining the gifts of both for the communion.

“Looking back a year ago, I am particularly thankful to you and all those who participated in the Twelfth Assembly, so well hosted by our Namibian sisters and brothers. We recall with gratitude the incredible work done by the local organizing committee, constituted by the United Church Council of the Namibian Evangelical Lutheran Churches that made the Assembly historic and memorable.”

He called upon Council members to uphold the public statements and resolutions from the Assembly as being critical to the life, ministry and witness as a communion and keep the LWF alive to the existential realities of the world today.

On the Reformation anniversary, he chose the metaphor of a cairn. It was a memorial but one that points the way. The journey through the 500th anniversary of the Reformation was a cairn in the sense of memory, looking back to where the LWF has come from. The LWF should note the struggles, challenges and significant achievements, especially as they relate to the question of justification and the search for Christian unity. But it was not only a memorial. “We are called to consider the anniversary as a cairn that points the way, the direction, looking forward to the way in which we could be instruments in God’s hands to witness to the gospel in word and service to the neighbor.”

Freely you have received, freely give

The theme of the 2018 Council meeting, “Freely you have received, freely give” (Matthew 10.8, NIV), brings to the fore Lutheran doctrinal foundation that everything, including salvation itself, is a gift from God, he said.

“The author used a language that can be likened to the language of economy, that presupposes that salvation and any other life-sustaining things were and are being received without any form of payment on the part of the recipient.”

“We are reminded of who we are - receivers and stewards of God’s free gift of grace in Christ”.

President Musa asked how resources entrusted to the communion are being used to care for the needs of others, and how the gospel takes on flesh in the daily realities of lives and relationships.

In his country, Nigeria, and in many other places, he said people were compelled to offer money or valuables in exchange for the promise of salvation, healing, deliverance and other blessings. “As a communion, we must deliberately remain firm in efforts to counter such acts by constantly reminding ourselves of the doctrinal ethos of “justification by grace through faith alone”.”

In looking to the future, the President reiterated the need for strong ecumenical relations. Both he and Pope Francis made clear during his visit and that of the vice presidents to the Vatican last December, that they look to the future with hope towards increased understanding, cooperation and unity in the body of Christ.

He said the LWF strategy 2019-2024 offered opportunity for the Twelfth Assembly resolutions to be implemented concretely. On prophetic action, he said the churches were called to come together in the face of ideologies, forces and structures that trigger and perpetuate many of the challenges facing the world today. “We are called to remember who we are as both objects of God’s love and agents of it. Liberated and empowered to defy but in words and actions, acts that undermine human dignity.”

He repeated the Assembly resolution on interreligious relations, which called on the communion to love the neighbor, work with sisters and brothers of other religions and those who are non-religious to build bridges of hope, love, peace and justice in this deeply divided world.

Joint action with other organizations must not only be sustained but nurtured. He pointed to the collaboration between the LWF and the Catholic relief agency, Caritas Internationalis, and with Islamic Relief Worldwide. “Equally crucial is that the LWF continues working closely with multilateral systems, such as the UN on human rights, gender justice and humanitarian crisis.”

He closed by saying it is critical that the LWF remain firm in its commitment toward growing as communion liberated by God’s grace. “We are not a communion preoccupied only with itself but engaged in the world, for the love and service of the neighbor. Let us therefore continue to be inspired by this and other biblical narratives in our Christian journey and faithful witness in our world of religious diversity with its multifaceted challenges.”

Full President's address to the Council

Photos of the Council

The 2018 LWF Council meeting takes place in Geneva from 27 June - 2 July. The theme of the Council is “Freely you have received, freely give” (Matthew 10:8, NIV). The LWF Council meets yearly and is the highest authority of the LWF between assemblies. It consists of the President, the Chairperson of the Finance Committee, and 48 members from LWF member churches in seven regions.

The LWF Strategy in Bahasa Indonesia and Swahili
news
tt