With passion on the journey from conflict to communion 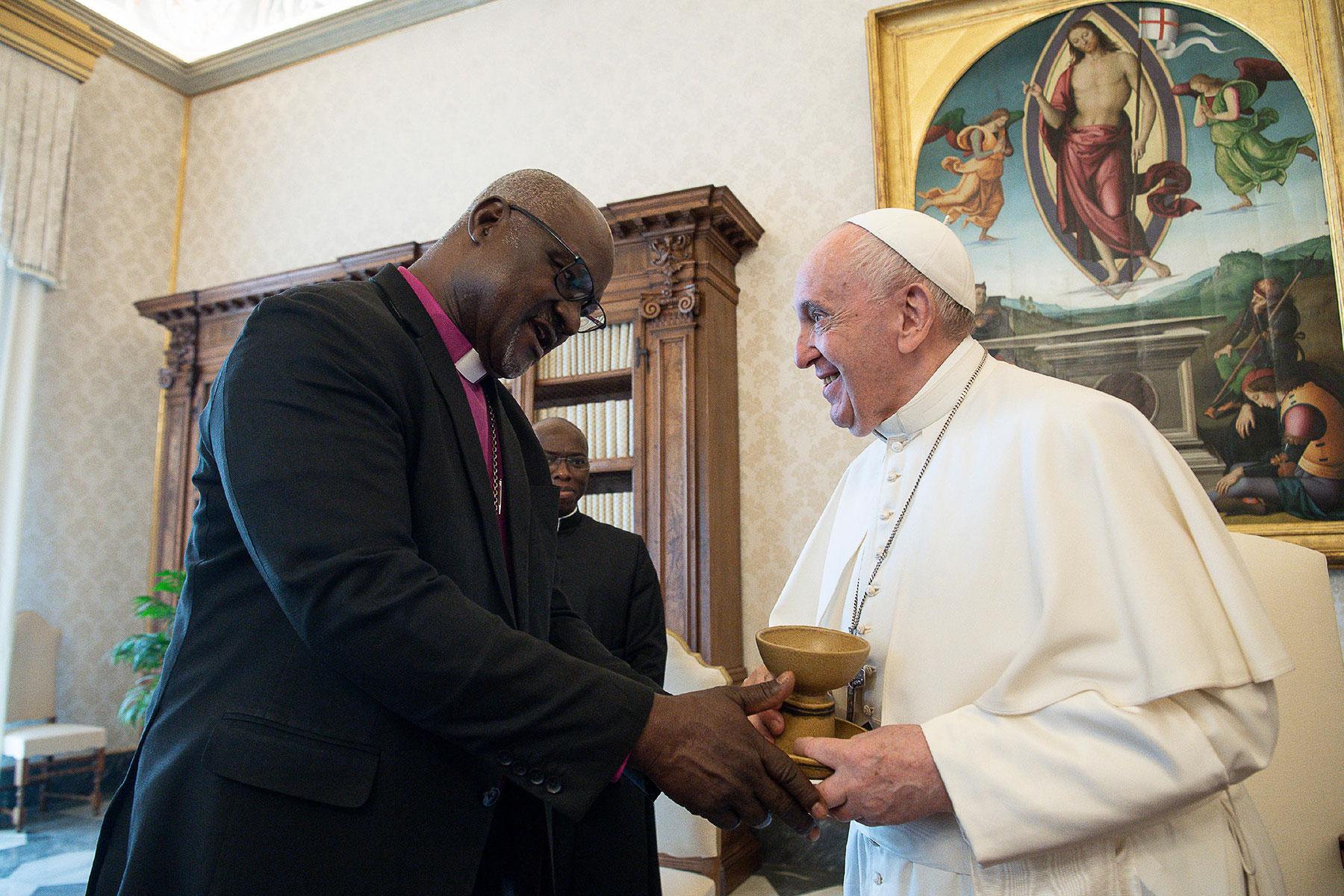 LWF leaders meet with Pope Francis in the Vatican, look ahead to 500th anniversary of Augsburg Confession

(LWI) - Meeting with Pope Francis in the Vatican on 25 June, both the Lutheran World Federation (LWF) President Archbishop Dr. Panti Filibus Musa and Pope Francis expressed the hope that the 500th anniversary of the Augsburg Confession in 2030 can become common ground on which to strengthen the commitment of Lutherans and Catholics to unity and reconciliation.

During the papal audience, the LWF President presented Pope Francis with the gift of a chalice and paten, crafted for the occasion by the brothers of the ecumenical Taizé Community. The glaze for the Eucharistic vessels was made with sand taken from the refugee camp in Za’atari, Jordan, where LWF has been working since 2012 to support Syrian refugees, internally displaced people and host communities. This gift, President Musa told the pope, “represents our calling to be one”

In his address, the pope thanked the Lutheran leaders for the gifts which, he said “evoke our sharing in the Lord’s passion.” He continued: “Let us continue, then, with passion on our journey from conflict to communion.”

The LWF leader is heading a delegation of representatives from all regions of the global communion of churches on a two-day visit to Rome. The trip follows on from a major milestone in ecumenical relations in 2016, as Pope Francis joined Lutheran leaders in the Swedish cities of Lund and Malmö for a joint commemoration of the Reformation.

In his words to the pope, Archbishop Musa said the journey is “irreversible” and now prompts Catholics and Lutherans to look ahead to the commemoration of the Augsburg Confession in the “hope that we will reconnect with its original ecumenical intention.” The Augsburg Confession is the primary confession of faith for Lutheran churches around the globe. Initially, it was presented as an ecumenical confession at the Diet of Augsburg on 25 June 1530 in an effort to restore religious and political unity within the church.

In his address, Pope Francis also noted that the Confession originally “represented an attempt to avoid the threat of a division in Western Christianity,” saying he hoped that “shared reflection” in the run-up to 2030 “may benefit our ecumenical journey.” Reflecting on that journey, he stated: “Ecumenism is not an exercise of ecclesial diplomacy but a journey of grace. It depends not on human negotiations and agreements, but on the grace of God, which purifies memories and hearts, overcomes attitudes of inflexibility and directs towards renewed communion: not towards reductive agreements or forms of irenic syncretism, but towards a reconciled unity amid differences.”

In his address to Pope Francis, the LWF leader noted that 2021 also marks one of the “difficult memories” from the past: the 500th anniversary of the excommunication of Martin Luther by Pope Leo X. Emphasizing that it is not possible to tell a different history, but to tell that history differently, Musa said the pope’s participation at the Common Prayer in Lund was “a powerful symbol for what God has accomplished” on the road to reconciliation and mutual recognition “as sisters and brothers.” A study group of Catholic and Lutheran theologians is researching the historical and theological context of the excommunication in preparation for the LWF Assembly in Krakow, Poland in 2023.

The archbishop thanked Pope Francis for his strong leadership during the COVID-19 pandemic, “reminding us of our deep bond as a human family.” He also noted the strengthening of cooperation to which LWF’s World Service and the Catholic network of aid and development agencies Caritas Internationalis are committing during this visit.

May the Holy Spirit continue guiding us so that we will gather one day at the table where God, through the gift of Christ, has made us already one.

The LWF president also presented the pope with an Italian translation of the Joint Declaration on the Doctrine of Justification (JDDJ), signed by Catholics and Lutherans in Augsburg, Germany in 1999. President Musa described it as the “cornerstone” document which now “brings together Catholics, Lutherans, Methodists, Anglicans and Reformed [churches] in joint proclamation and service.”

“With prayer (Taizé), service (Za'atari) and dialogue,” Musa concluded, “may the Holy Spirit continue guiding us so that we will gather one day at the table where God, through the gift of Christ, has made us already one.”

‘What unites us is stronger than what divides us’
news