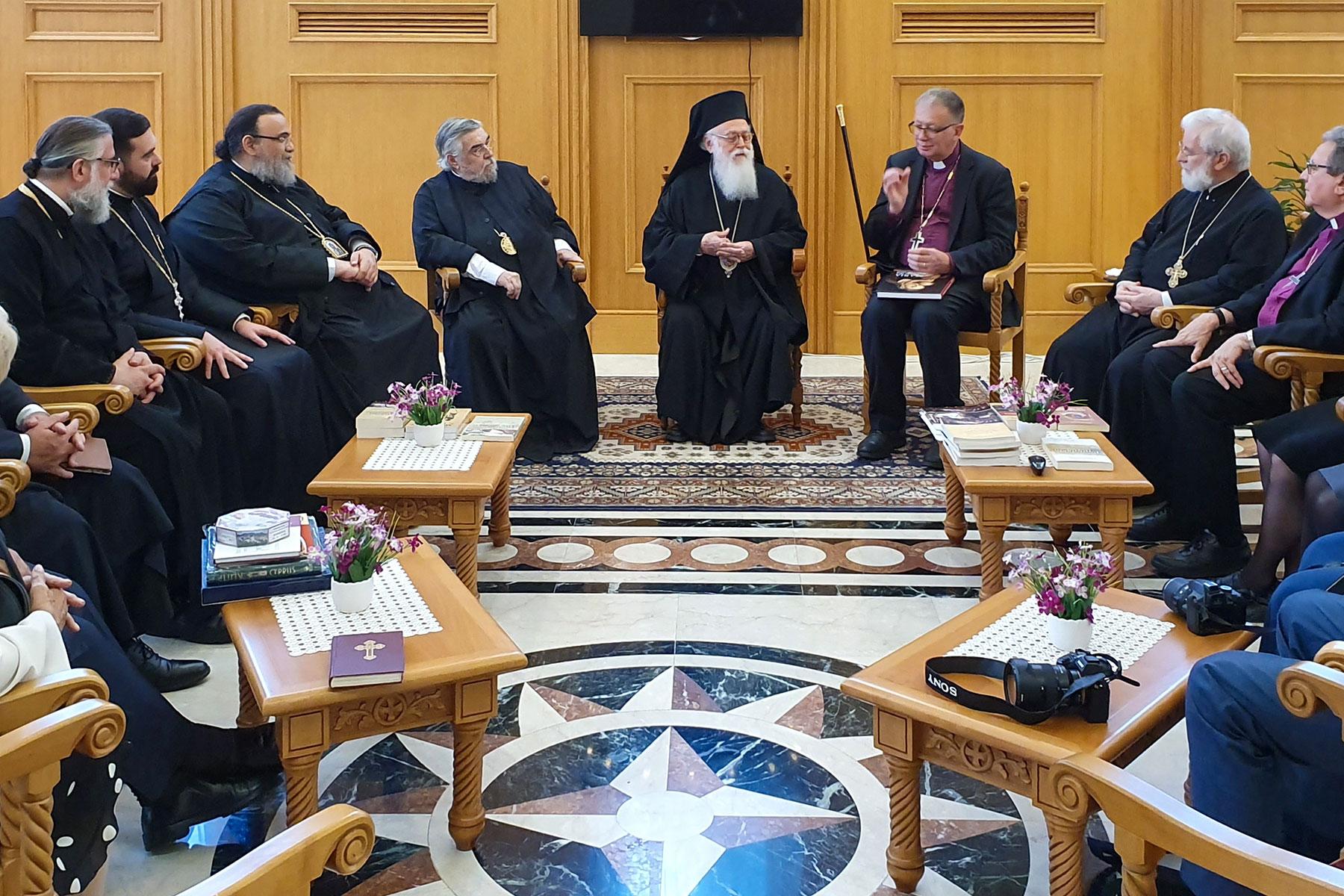 Members of the international Lutheran-Orthodox Commission meeting with Archbishop Anastasios in Albania in 2019. All photos: N. Hoppe

Theologian, Dr Nathan Hoppe, on the church in Albania and the challenges of Lutheran-Orthodox dialogue

(LWI) - Dr Nathan Hoppe was born in Colombia, the son of Evangelical Protestant missionaries from the United States. Today, he is a member of the Orthodox Church and lives with his family in the Albanian capital, Tirana, teaching at the Resurrection of Christ theological academy and leading the archdiocesan children’s ministry team.

He is also a member of the Orthodox Church’s international dialogues with the Lutheran World Federation (LWF), the Roman Catholic Church and the Anglican Communion. At a recent online meeting of the Commission for dialogue with the LWF, he was one of four speakers exploring the theme of blessing as a work of the Holy Spirit in these extraordinary times. “Dr. Hoppe’s reflections pointed us to the challenges of sacramental embodiment, what it means to be church in the shadow of the pandemic,” said Prof. Dr. Dirk G. Lange, LWF’s Assistant General Secretary for Ecumenical Relations.

Hoppe shares his story and his hopes for the future of the Lutheran-Orthodox dialogue. 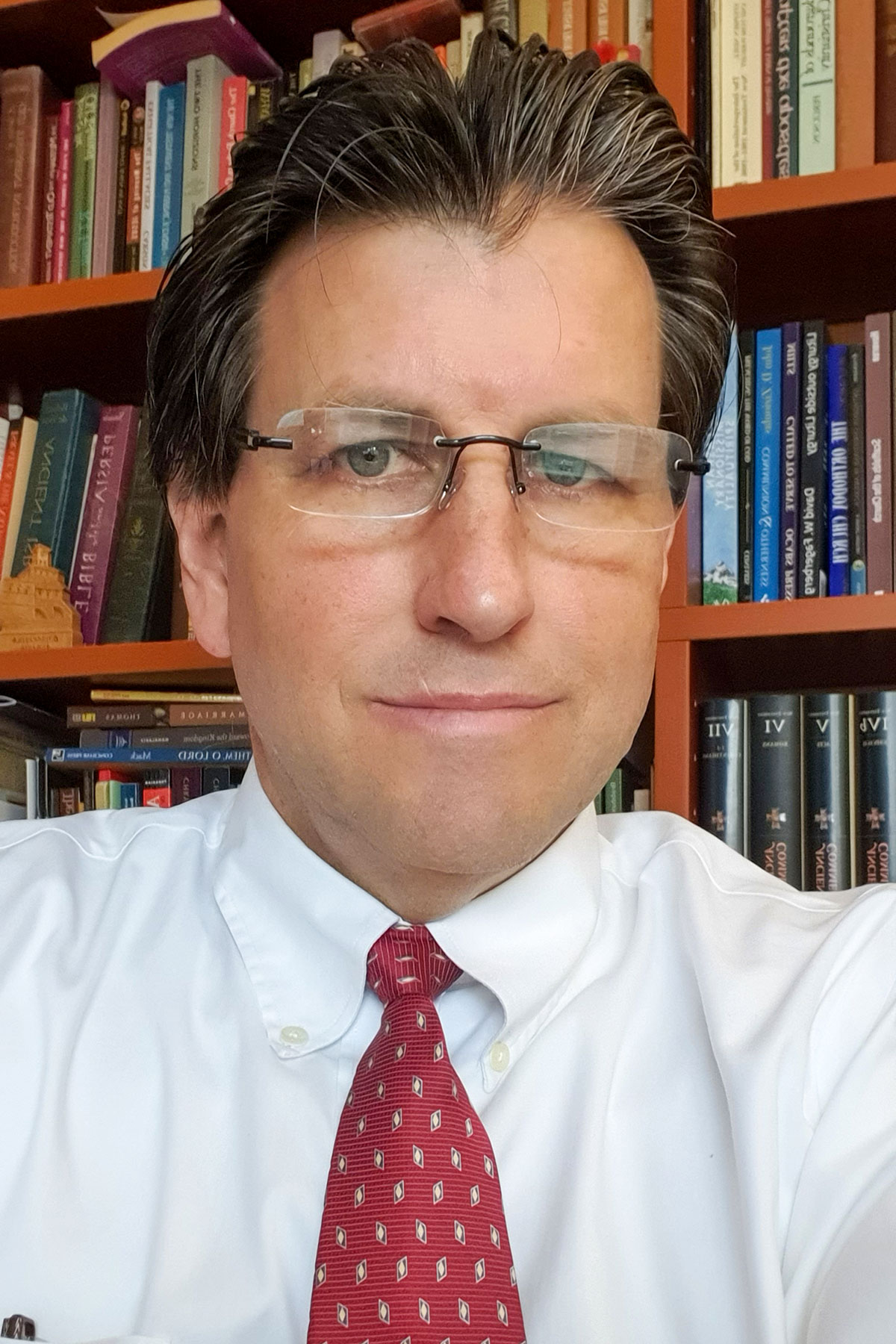 How did you become a member of the Orthodox Church and where does your interest in ecumenism stem from?

My parents were missionaries in Colombia so I grew up there and discovered the Orthodox Church during my university and theological studies in the U.S. As a child of missionaries, I was exposed to many different parts of the Christian tradition, so during my faith journey I didn’t leave a tradition, but rather I embraced the Orthodox Church. I have always had a heart for the unity of Christians and always tried to build bridges, to strengthen relationships that can build up the unity of the church.

When and why did you move to Albania?

I was received into the Orthodox Church in the United States in 1994 and sent as a missionary a couple of years later to serve under the leadership of Archbishop Anastasios. I came to support the church here which was in the process of rebuilding after the disastrous communist persecution that set out to destroy all forms of religious life. Those years, in the 1990s, marked a period of people flooding back into the churches so there was very visible growth at that time. Now, we are more in the stage of stabilizing and maturing, so numerical growth is not as rapid, but the internal growth of developing infrastructure and educating leaders still carries on.

How much is ecumenism a priority in a country where the church is still facing the huge challenges of rebuilding, training and equipping people for ministry?

Archbishop Anastasios, the leader of the Autocephalous Orthodox Church of Albania, is well known for his emphasis on mission and proclamation of the Gospel, but also for his ecumenical work. As one of the presidents of the Central Committee of the World Council of Churches and an honorary president of the World Conference of Religions for Peace, he is renowned for building relationships with Roman Catholics, Evangelicals and others, working for the unity of the church.

It is true that all of our communities are still in the process of recovering and rebuilding from the persecutions so, to some degree, we are occupied with internal things. But there is a strong sense that, since Christianity is a minority in Albania, if we don’t get on with each other, it won’t be good for any of us. So, there is an intentional cultivation of relationships, at leadership level and, where possible, at the grassroots as well.

How has the COVID-19 pandemic affected the work that you are doing?

It has been quite challenging, especially last spring during the Lenten period which is an intense and special time with lots of extra services, but suddenly we were placed under a very strict quarantine where people were not allowed out. We transitioned to online services, but that is very difficult in a sacramental church where you can’t receive communion online.

But we found new capabilities too, so in the children’s office we organized Sunday school classes online and sent out activity packs during Holy Week for children to connect with the services. We haven’t been able to hold our usual summer camps but we have had Albanian kids living in Europe or the U.S. joining in a weekly online group with kids here in Albania, which no one thought of doing before the pandemic. 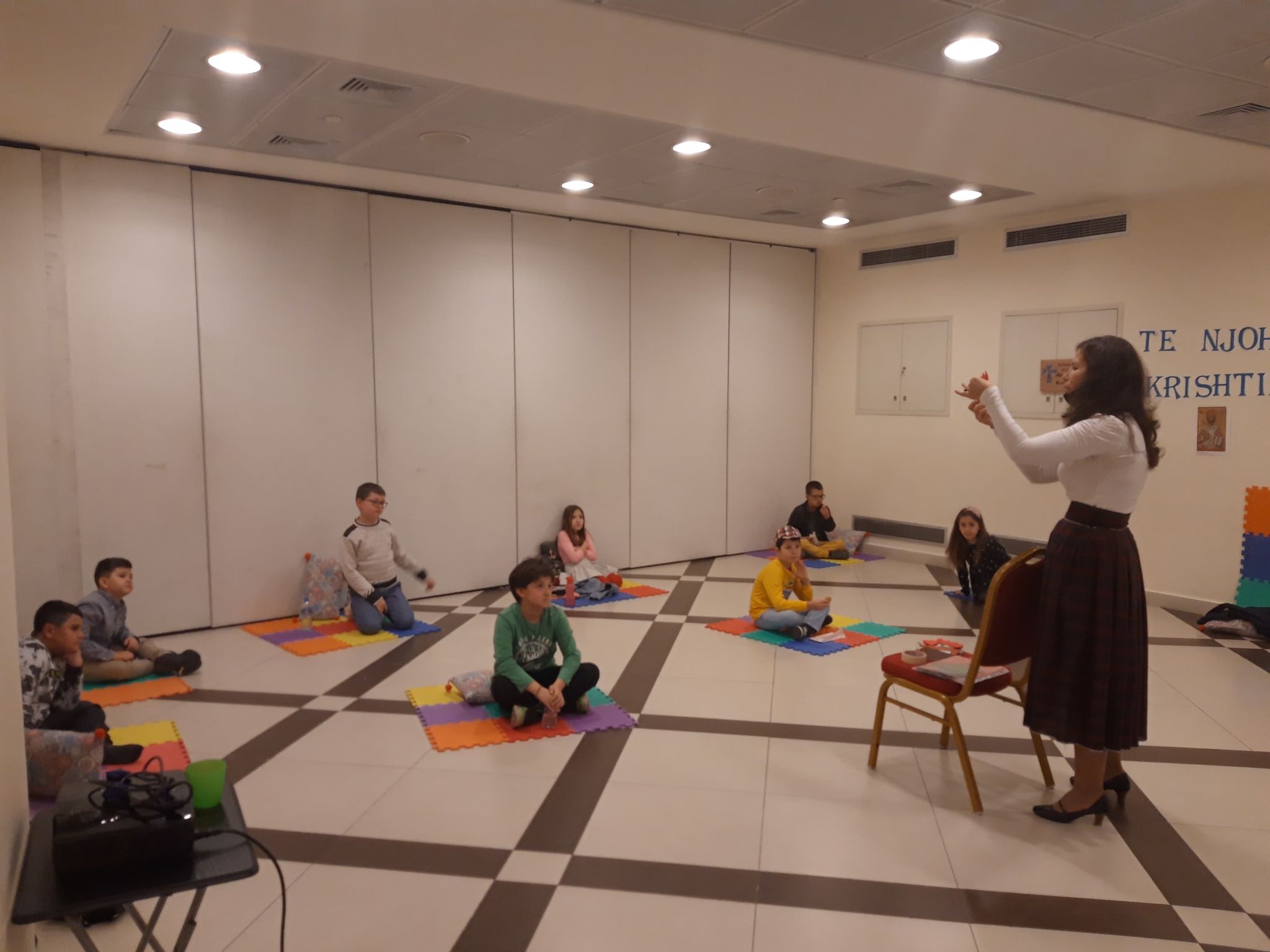 For the recent celebration of Easter this year, we normally celebrate in the middle of the night but we still have a curfew in place so we had to do our services on the Sunday morning. But apart from that, churches are open again, vaccinations are going on and the number of cases and deaths is quite low so we are returning to more normal life, even with social distancing and mask-wearing.

The work of the International Joint Commission on Theological Dialogue between the Orthodox Church and the LWF has also been affected by the pandemic, hasn’t it?

Yes, I have been on the Commission since 2004 and, beyond the purely theological work, it has been so important to develop a network of people who meet regularly and grow in trust and friendship with each other. The hardest thing about COVID-19 is that we haven’t been able to meet together, to sit together and share meal times together.

Over the past decades, we have done some really good theological work on different aspects of the church such as Scripture, the sacraments and ordained ministry, but most importantly we try to understand one another better. If we take time to really listen to each other, we find that what we mean, when we say things, is often closer in meaning than the words we use to describe them.

Of course, it is hard to have those extended conversations in virtual environments. But I think there are ways in which Lutheran liturgical practice has been influenced by our dialogue, placing more emphasis on the Real Presence of Christ in the Eucharist for example, and it has been important for Orthodox theologians to see the life of Lutheran churches and understand how life in Christ can be lived out in models that we aren’t always used to.

What is on the agenda for your next plenary session of the Commission?

We are focusing on the work of the Holy Spirit in the life of our churches and more broadly in the world, so looking at things like environmental and justice issues too. This may be one of the areas in which we, as Orthodox, will hear and learn from our Lutheran partners about how the Holy Spirit is working in ways we hadn’t thought about. We have a strong sense of the sacramental but I’m looking forward to being enriched and growing in my understanding of how the Spirit is active in our whole lives.

We normally alternate plenaries with preparatory sessions and our last plenary was in Helsinki in 2017 (the last in-person preparatory meeting was in Tirana, 2019). We were due to meet last year or this year, but both were postponed so we hope we can hold another plenary next year. We had a good online meeting in March this year, discussing the work of the Holy Spirit in these extraordinary times and remembering one of our members, Archimandrite Alexi from the Patriarchate of Antioch, who was a victim of COVID-19. We talked about the importance of accompanying people who suffer and offering spaces for prayer and lament.

How challenging is the fact that within the Commission, you represent the 14 different Orthodox Churches which do not always agree among themselves?

There is a strong sense of our core theological identity as one Orthodox Church, but within that each church has its own incarnation and language. It is true that there are sometimes significant differences of expression and opinion that you sometimes don’t notice until you talk to a third party, like the Lutherans. One valuable part of the bilateral dialogues is that they mark one of the few times that we, as Orthodox, get together to talk things over. So, they are also venues to help foster communication and unity among the Orthodox world.

As a group of experts, you are discussing complex theological issues but what effect, if any, does this have on the life of people in your churches?

Of course, we always have to bring this work down to the real-life level and my experience of the dialogue informs everything I do, as leader of a ministry team and as a teacher in the seminary. One of the classes I teach is on ecumenism, so as well as talking about the history, I can share with them my experience of relating to people from many other Christian traditions.

Ecumenical Perspectives: The LWF engages in bilateral, trilateral and multilateral dialogues and practical cooperation with many other Christian churches and world communions. In this series we profile some of those ecumenical partnerships, highlighting past progress and current challenges on the road towards full Christian unity.