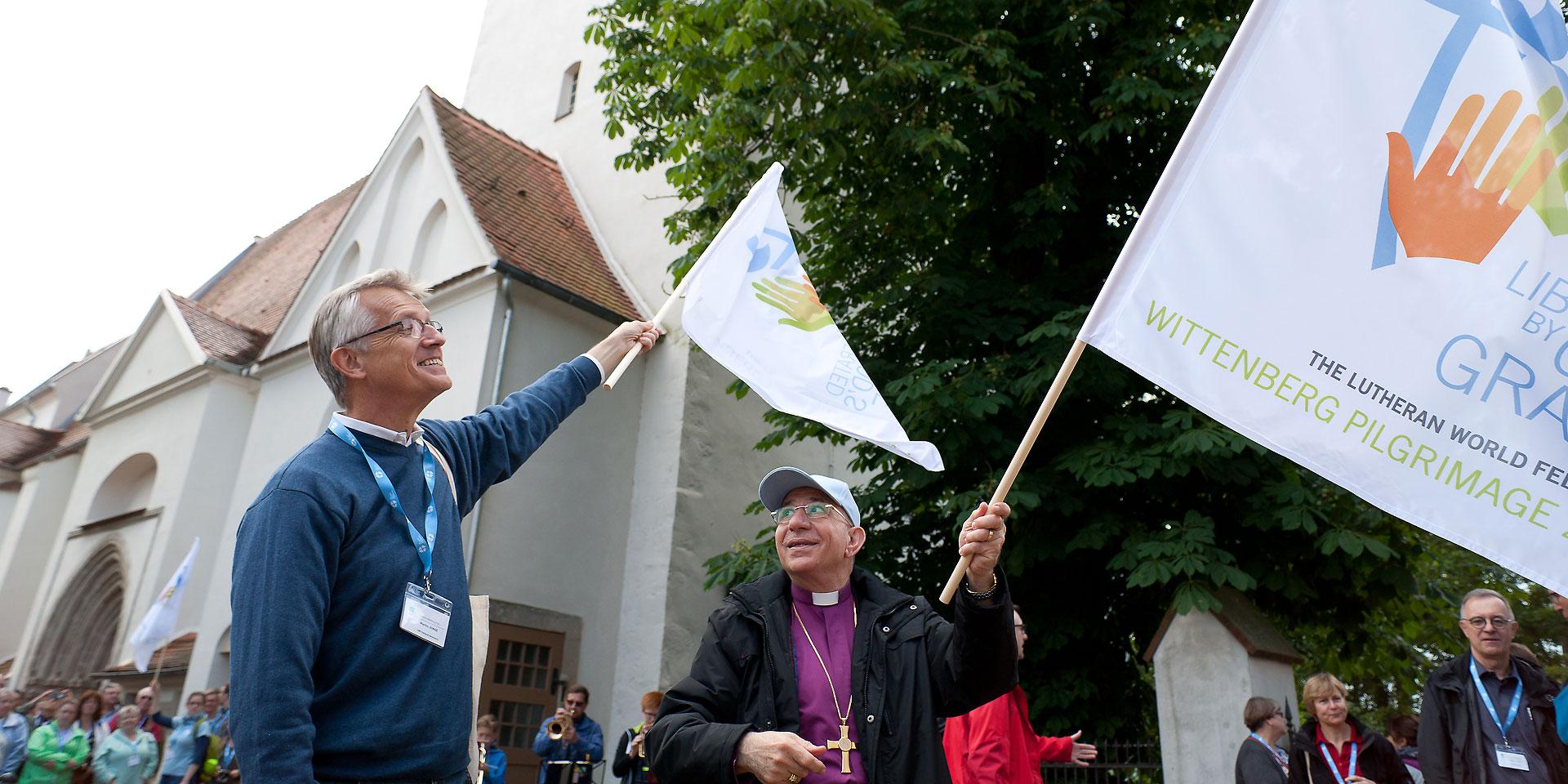 Liberated by God's Grace â Wittenberg Pilgrimage 2016. LWF General Secretary Martin Junge and LWF President at the beginning of the pilgrimage in front of the St. Nikolai Church in Coswig. Photo: LWF/Marko Schoeneberg

A time to worship together, commemorate 500 years of the Reformation, decide work priorities and new governance

Lutherans from around the world are gathering in the Namibian capital Windhoek, 10-16 May, for the Twelfth Assembly of The Lutheran World Federation (LWF).

With the theme “Liberated by God’s Grace” and sub-themes articulating that creation, salvation and human beings are “not for sale,” the Assembly is jointly hosted by the three LWF member churches in the country under the umbrella body, the United Church Council – Namibia Evangelical Lutheran Churches (UCC-NELC). It is a historic occasion as the 500th anniversary of the Reformation falls in 2017 and will be commemorated during the Assembly.

The three churches have a combined membership of almost 1.2 million, which is around half of the approximately 2.4 million who make up the total population of Namibia. Namibia was first a German colony, 1884 – 1917, and then administered by then apartheid South Africa until its United Nations (UN)-guided independence in 1990. LWF supported the churches as they stood with their people and longed for independence.

Almost 800 participants, including 324 delegates from the 145 LWF member churches in 98 countries worldwide will attend. The assembly is the highest LWF decision-making body and it meets normally every six years.

The Eleventh Assembly was held in 2010 in Stuttgart, Germany.

Worship and commemoration of Reformation anniversary

The assembly will begin with a eucharistic opening worship on Wednesday, 10 May, at which Rev. Dr Elena Bondarenko from the Evangelical Lutheran Church in European Russia will preach.

The Reformation commemoration will take place on Sunday, 14 May, in the Sam Nujoma Stadium in Windhoek, named after the first president of independent Namibia. Bishop emeritus Dr Zephania Kameeta, who has a long and deep engagement with the LWF including as a former Vice-President for Africa will preach on the Assembly theme, “Liberated by God’s Grace.” Kameeta is currently Minister of Poverty Eradication and Social Welfare in Namibia.

The Assembly has garnered much attention in the country and NamPost—Namibia Post—is issuing a first day cover, a single stamp souvenir sheet and a post card stamp taking up the Reformation commemoration. The design shows the African continent outline and the two countries there that have been LWF Assembly venues: Tanzania in 1977 and Namibia in 2017. Thousands of people from all over the country are expected to join assembly participants in the event at the stadium, which can hold up to 10,000 people.

On 16 May, 32-year old Rev. Lydia Posselt from the Evangelical Lutheran Church in America will deliver the sermon at the closing eucharistic worship of the Assembly.

Posselt was the winner of the Assembly preaching contest, in which an international LWF jury and online voters selected the best sermon submitted from among several entries by young pastors in the LWF member churches. The idea stemmed from the fact that Martin Luther was 33 years old when he triggered the Reformation in 1517.

Eminent Congolese surgeon Dr Denis Mukwege will deliver the keynote speech on 11 May, focusing on the assembly theme.

A medical doctor from the Democratic Republic of Congo, Mukwege has provided leadership for Africa and the world, standing up for dignity and rights of people, particularly women who are survivors of sexual violence in conflict situations.

He is an active Christian layperson who has been recognized with a number of prestigious international awards including the 2008 UN Human Rights Award, the Sakharov Prize for Freedom of Thought in 2014, and he has been nominated for the Nobel Peace Prize.

“We welcome the opportunity to have an expert from Central Africa speak about a problem that is sadly common all over the world,” says LWF General Secretary Rev Dr Martin Junge. “We will listen to a leader who doesn’t stop at the analysis of a problem but actively works for its solution.”

As the highest LWF governing body, the Assembly will give general direction to the communion’s future work for the next six years. It will speak out on issues concerning the life and witness of the churches and the world.

Delegates will elect a new LWF President and members of the annual governing body, the Council, to serve until the next Assembly. LWF President Bishop Dr Munib A. Younan of the Evangelical Lutheran Church in Jordan and the Holy Land will be concluding his term, to which he was elected at the July 2010 assembly in Stuttgart, Germany.

Global Commemoration of the 500th Anniversary of the Reformation attended by thousands in Windhoek, Namibia
news
tt

Global Commemoration of the 500th anniversary of the Reformation
news
tt