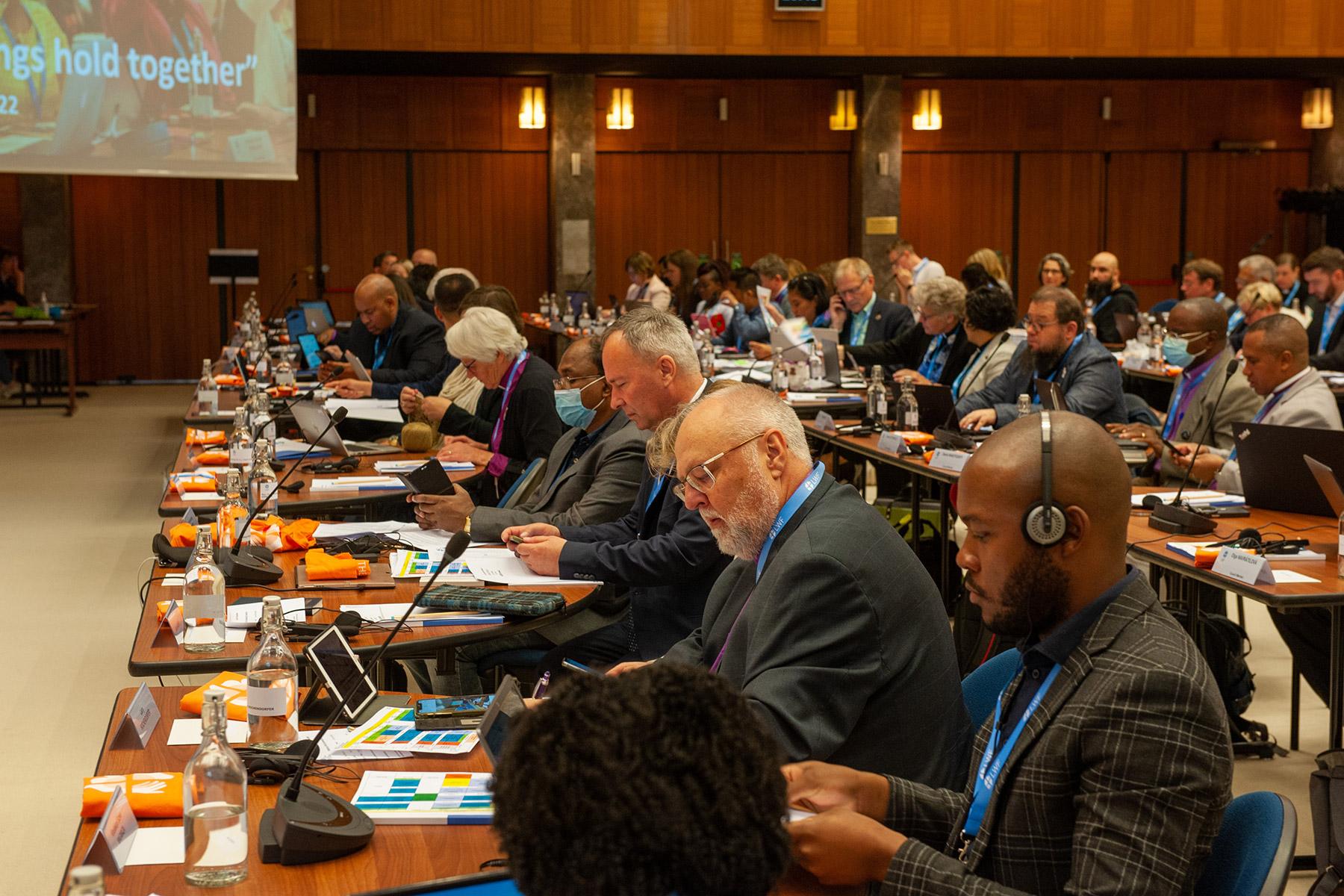 (LWI) – The Lutheran World Federation (LWF) has reiterated its previous calls for Russia’s immediate withdrawal from Ukraine, and urged greater investment by the international community in peaceful means of ending conflicts around the world.

In a statement today from its Council meeting in Geneva, the LWF governing body expressed “outrage” over the war, describing its cost as “staggering” with respect to loss of human life, destruction, displacement, and contravention of humanitarian and human rights laws. It also cited the global impact of the war on food availability and prices.

The Council drew attention to the need for peace and justice in yet unresolved conflicts in countries such as Colombia, Myanmar, Democratic Republic of Congo and Sri Lanka, among others. It expressed deep concern over the continued proliferation of arms, which is a major driver of both conflict and insecurity, particularly in Africa, Asia and Latin America.

While appealing to LWF’s member churches to pray and work for peace and justice in all communities, the Council urged them to increasingly address the prevention of sexual and gender-based violence especially in conflict situations.

LWF Council Statement on the war in Ukraine and other conflicts

The Council expresses its outrage at the war in Ukraine that has continued for nearly four months since the Russian military invasion of the country. The cost of this war in terms of lives and livelihoods destroyed, displacement of people, violation of human rights and dignity, and the contravention of international humanitarian and human rights laws, is staggering. The global impact on food prices and availability is of grave concern.

The Council notes the global focus on the war in Ukraine because of its worldwide impact, but also calls attention to the need for peace and justice in other conflicts across the world, including in Cameroon, Colombia, Democratic Republic of Congo, Ethiopia, Haiti, Myanmar, Nigeria, South Sudan, Sri Lanka, Syria and Yemen, among others, which continue to rage on and cause massive loss of lives, displacement and humanitarian crisis. The Council is deeply concerned by the constant increase in the proliferation of arms, which is significantly exacerbating conflicts and insecurity in many countries, particularly in Africa, Asia and Latin America.

The Council recalls the statement on Peace and Justice from the LWF 1984 Assembly in Budapest, Hungary which declared “...the firm conviction that peace is the will of God for the whole creation. War is not according to the will of God. There can be no lasting peace as long as people starve, injustices prevail, or people are oppressed, persecuted, or discriminated against because of their faith, view of life, race, sex, or ethnic origin. Social and economic injustice as well as ideological conflicts are at the root of many of the wars of liberation. There is no peace without justice, and no justice without peace...”

As in the case of the war in Ukraine, the Council is distressed by the gendered dimensions of violent conflicts and their impact on women and children, particularly in the form of sexual and gender-based violence and trafficking.

The Council stands in solidarity with and prays for all affected throughout the region, particularly the over 15 million people who have been forcibly displaced. We mourn with the families of the thousands who have lost their lives.

The Council is deeply grieved by cases of discrimination against non-Europeans who were fleeing the war in Ukraine. The Council abhors and rejects all instances of racial and ethnic discrimination as a violation of human dignity, human rights, and human decency. In times of war, all must be committed to stand together, safeguard dignity, and “welcome the stranger.”

The Council recognizes and thanks God for the ministries and witness of Lutheran churches in Ukraine, in neighboring countries, elsewhere in the region and throughout the world, that are providing humanitarian aid, protection, pastoral support and accompaniment to the millions of people affected by the war.