Leadership for peace and reconciliation 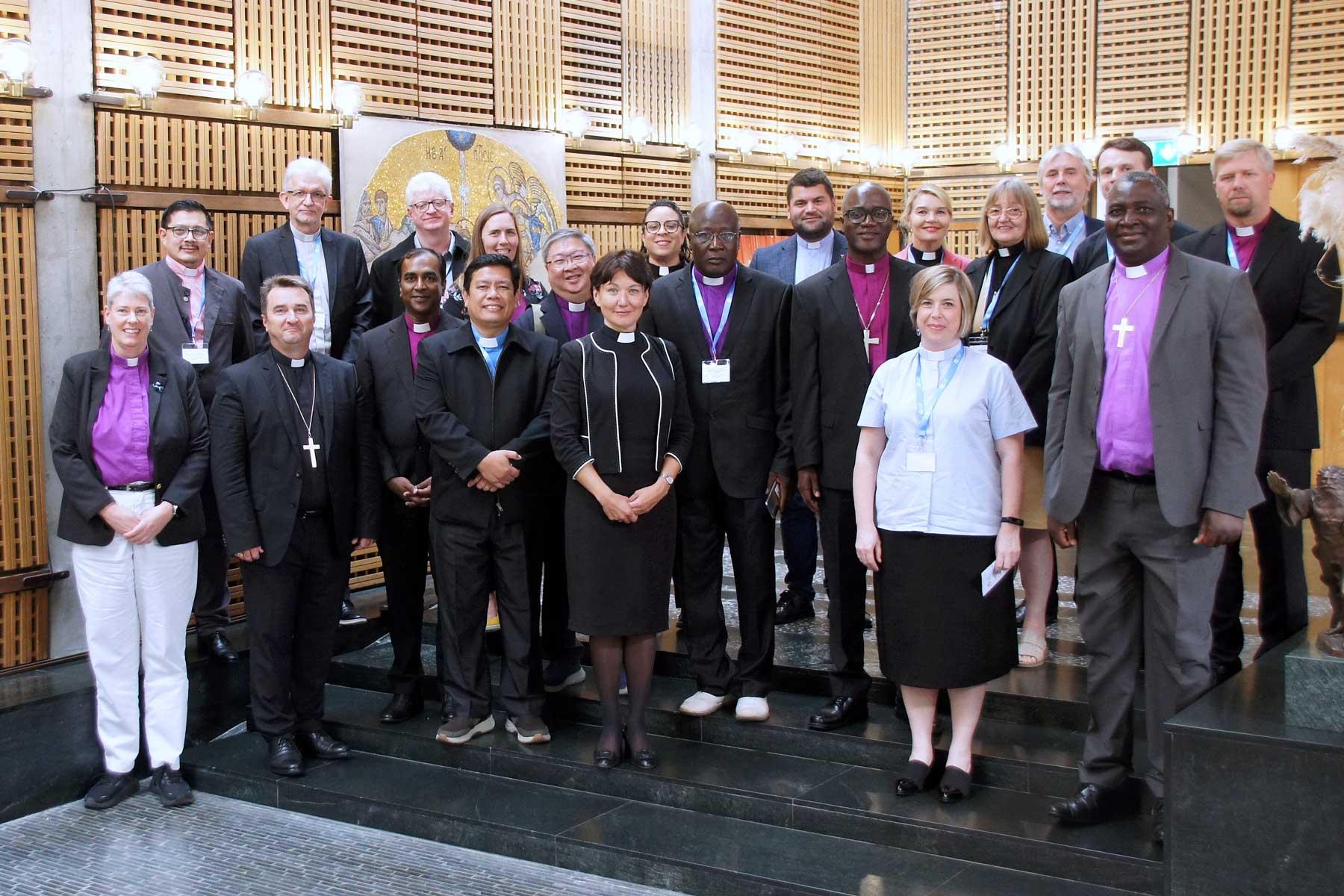 (LWI) - The church does not live outside the world but is called to share the good news of Jesus Christ and be messengers of peace and reconciliation in the world. The Lutheran World Federation (LWF) General Secretary Rev. Anne Burghardt emphasized this when she welcomed a group of newly elected leaders from LWF’s member churches, meeting in Geneva this week, to reflect on leadership in the communion.

“Leadership and episcopal ministry in the LWF Communion” is the theme of this year’s Retreat of Newly Elected Leaders (RoNEL), attended by 16 church leaders from 13 countries.

In her presentation, Burghardt reflected on the four founding pillars of the LWF and how they continue to guide the communion’s mission and vision: rescue for the needy, joint efforts in theology, shared witness to ecumenical unity, and common initiatives in mission. Referring to an LWF analysis earlier this year on challenges the communion and its member churches engage with, she highlighted three major findings. The COVID-19 pandemic impact; the rise of authoritarian and populist regimes, polarization and increase of fundamentalist theological tendencies; and climate change emerged as key concerns irrespective of the geographical location of LWF’s member churches or its country program work.

When it comes to the role of churches in societies, she described leadership for peace and reconciliation as one of the most urgent tasks for the LWF today. “It is important not to be instrumentalized by politics, but to stand for human dignity and reconciliation,” Burghardt said. At the same time, she noted, “we as Christians should bear in mind that it is God who brings about reconciliation, while our role is to participate in this process.”

The church itself, Burghardt observed, is not protected from authoritarian patterns which support and presuppose a top-down leadership that avoids criticism, unwillingness to learn from feedback or listen to opinions that differ from one’s own. When such leadership patterns start to infiltrate churches, they not only run the risk of hindering the use of the God-given gifts of individuals but they are also contrary to the Lutheran principle of the priesthood of all believers, which supports inclusion, not exclusion of people. “We therefore need to ask ourselves: are our churches places where all people can serve?” she asked.

We need to ask ourselves: are our churches places where all people can serve?

The general secretary commended the work of many LWF’s member churches and country programs for leadership in responding to the “shadow pandemic” of sexual and gender-based violence. She cited research about the psychosocial consequences of physical distancing including loneliness and individualism, and the rapid increase of suicide rates among teenagers and young adults. “These are all worrying tendencies, which call churches to pay more attention to pastoral care and to equip pastors and pastoral care workers with counseling skills.”

On climate change, Burghardt highlighted concern for the underlying quest for social and economic justice and the need to address the theological implications of how the Bible is read and understood. One of the questions is the interpretation of Genesis. “How many of our pastors still tend to quote Genesis 1:28, the command to ‘subdue’ the earth, as permission to exploit the environment, although what the Bible actually means, is good governance? Shouldn’t we put more emphasis on Genesis 2:15 to till and take care of the creation?” she asked.

Learning from each other

The general secretary also invited the church leaders to start conversations on the LWF Thirteenth Assembly theme, “One Body, One Spirit, One Hope” in order to make a meaningful contribution from their own contexts. “All LWF member churches have something to learn from each other. We just have to be patient enough to listen,” she added.

The first part of the program includes sharing leadership experiences from their own contexts, discussing guiding principles of being a good leader, and learning about LWF’s strategic work. The LWF Center in Wittenberg, Germany, will host the second part of RoNEL, 9-12 September.

Reflecting together on leadership in the Lutheran communion
news