Michelle Schwarz from the Evangelical Lutheran Church of Saxony (Germany) is one of the young people representing the LWF at the UN climate conference COP27. In this interview, she gives insights into the LWF youth advocacy for climate justice at the global level and her engagement at home. 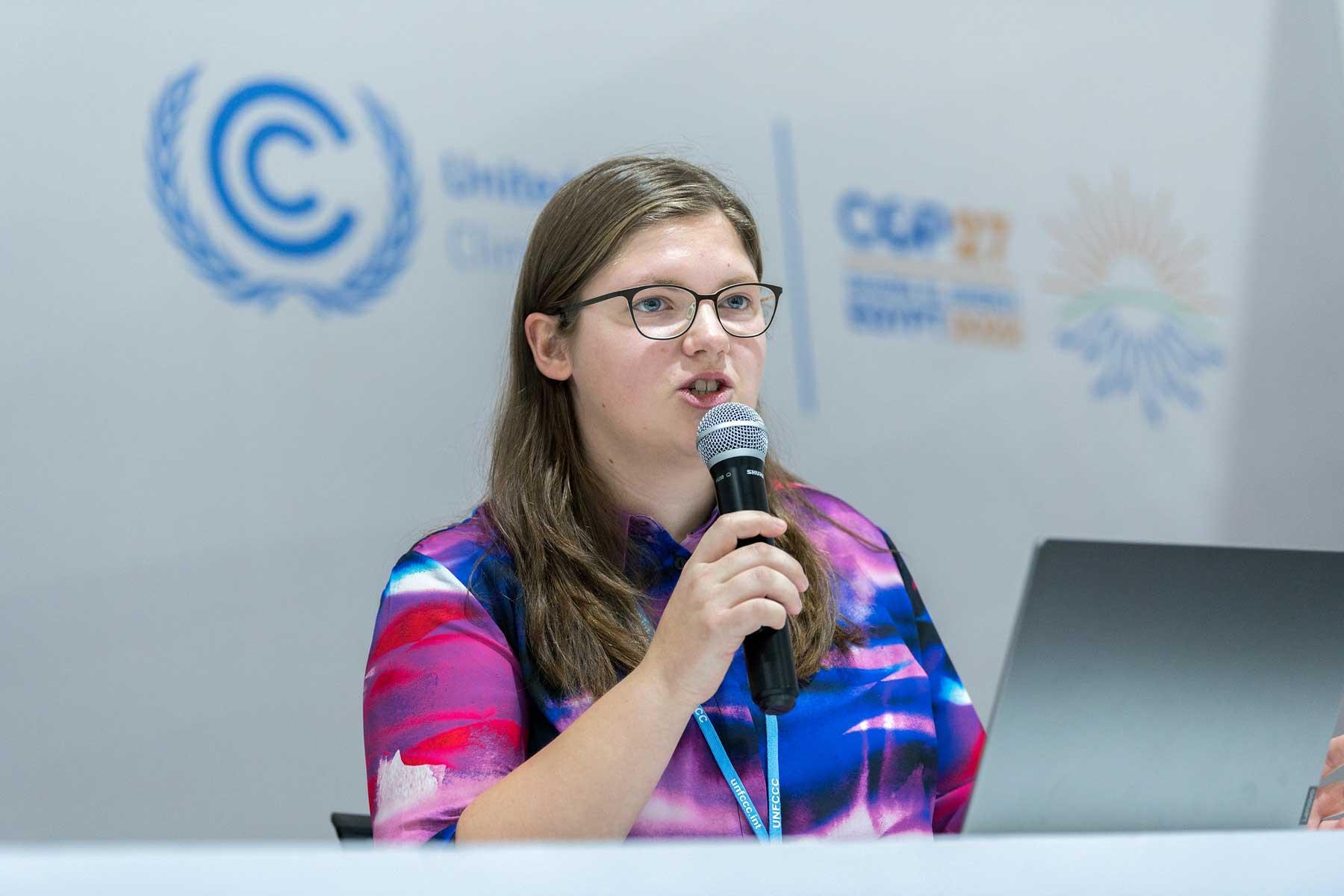 Michelle Schwarz from the Evangelical Lutheran Church in Saxony (Germany) is an LWF delegate to COP27. Here she speaks on an interfaith youth panel during a side event of the UN climate conference. LWF/Albin Hillert

Voices from the Communion: COP27 delegate Michelle Schwarz from the Evangelical Lutheran Church of Saxony

(LWI) - Being part of The Lutheran Federation (LWF) delegations to the UN climate conferences COP26 and COP27 has strengthened her involvement in activism groups and advocacy work for climate justice and creation care, says theology student Michelle Schwarz from the Evangelical Lutheran Church of Saxony, Germany.

In this interview, she speaks directly from Sharm el-Sheikh, where negotiations are ongoing. She shares insights about the global conference’s expected outcomes and her engagement in climate justice at the local level.

As COP27 is about to end, what is your preliminary conclusion?

For me, COP27 was successful because I could make many contacts I want to deepen in the coming weeks.

As far as the negotiations are concerned, this COP will probably not be a step backward, but the results will at least move closer toward climate justice a little bit. But the atmosphere is tense in many places, not least because some major decision-makers are undermining their pledges by continuing to use fossil fuels and through insufficient payments for the most vulnerable. That seems very contradictory to me since COP27 was supposed to be the “COP of implementation.”

It was fascinating to see how President Lula from Brazil presented himself. He has become a prominent figure of hope, especially for the Amazon region, and was in the limelight of the conference for a few days.

Every day there were so many events that it was difficult for me to get a concrete picture of possible closing scenarios. But one thing is sure: after the COP is before the COP. And no matter what the next two days will bring, it will unfortunately not be enough to achieve the goal of limiting global warming to 1.5 degrees Celsius.

Last year, you participated in COP26 online; this year, you are in Sharm el-Sheikh. How would you describe these two modes of participation?

As a member of the LWF delegation to COP26, I started learning about the conference’s structures. I got involved with issues I knew little about and learned the terminology, without which I would not get anywhere in Sharm El-Sheikh today. In short, through online participation, I had the opportunity to grow into advocacy work and prepared to be there in person this year.

I dove into the global political conversation on climate justice for two weeks in both forms of participation. Last year, I could follow everything very comfortably from home. This year, it’s a little easier not to lose focus because I don’t have to go to university or work during the conference.

What developments – internationally and in your region – regarding climate justice have you observed since COP26?

Internationally, I have noticed the pressure from civil society on politicians is increasing. It is important to recognize that climate movements are growing worldwide. As a result, people are beginning to focus on concrete options for action and are increasingly asking critical questions.

In my region and specifically in my church, I have seen primarily structural reforms regarding climate justice: There is more work on systematic guidelines, rulebooks, and concrete implementation options for climate justice concerning events, transportation, and lifestyles. That still takes time to finalize, but it is a significant development.

Can you tell us about your background and how you became involved in advocacy for climate justice?

I grew up near a former open-cast lignite mine in the Leipzig area, the scale of which forced many people to leave their homes. Those who stood up for justice at that time were the church congregations. Christians from our region got politically involved in forums and organized demonstrations and peace prayers.

These stories from my parents greatly impacted me and connected my Christian faith to the care of creation at a very early age. I started to get involved in smaller climate protection projects of different organizations and eventually decided to get involved in my church through these experiences.

With the support of the LWF and young people from all over Saxony, we developed a guide for climate-neutral church camps and distributed it in church congregations. This experience motivated me to stand up for our future and remain active in committee work. Since then, I have been involved in activism groups and advocacy work.

One of the initiatives you engage in at the local level is “Churches for future.” Is it connected to the “Fridays for future” movement? What are you calling for?

Churches for Future is an initiative that connects church communities, looks for ways to protect the biodiversity of these communities and offers workshops.

We are also in close contact with the Fridays for Future groups and jointly organize peace prayers and actions at demonstrations with Health for Future, Scientists for Future or (Grand)parents for Future.

Our claim as Churches for Future is to call for active care of creation and to become aware of our responsibility and ability in climate justice as a Christian community.

You are also a co-founder of the #theoversity platform. What are you promoting? Does it help you pinpoint the intersections between climate justice and gender, origin, etc.?

#theoversity is a student initiative from Leipzig that advocates for diverse perspectives in our teaching. After the death of George Floyd in 2020 and with the Black Lives Matter demonstrations in the USA, we have learned how vital it is to question one’s perspective and to reflect self-critically. We know that all of us come from a discriminatory system, but our goal is to help transform that system.

We do this through teaching evaluations, reading circles and events of global theology perspectives. We consider not only liberation theology but also eco-theology, feminist exegesis, postcolonial exegesis, critical whiteness, diversity, and ecumenism. We want to see the overall picture and not just the Eurocentric view.

That has helped me learn that these topics are interconnected; I see that many others feel the same way.

The synod of the Evangelical Church in Germany (EKD) has recently discussed the theme “Protestant Church(es) on the Way to Climate Neutrality 2035”. How ambitious are the aims formulated there?

I think the EKD Synod has made a good start in formulating clear goals and concerns and following up with action. The new climate protection guideline aims to achieve 90 percent net greenhouse neutrality in the EKD constituency by 2035. Climate neutrality is to be achieved by 2045.

So, finally, we have a guideline to give us orientation. However, as Protestant churches in Germany, we have not yet reached the level of ambition we should.

This EKD guideline offers much room for interpretation. On the one hand, this is necessary for implementation in different congregations; on the other hand, that also means that we have to stick to our intended goal to implement these guidelines skillfully and thoughtfully.

What are you taking away from COP27 for your advocacy work in Germany and the LWF in the coming year?

I am leaving Sharm El-Sheikh with many impressions, experiences and memories that I want to follow up on. COP27 taught me how some processes work. For example, I learned how to write strategy papers, organize events, network with people and talk to politicians.

These are all things that I experienced at this level for the first time. When I return to Germany, I want to learn more advocacy strategies and stay in close contact with the LWF. I would also like to stay on the ball with YOUNGO, the official children and youth constituency of the United Nations Framework Convention on Climate Change (UNFCCC).

For me, this COP was the first significant step and door opener to enter something I enjoy very much and where I can also give a lot. The message I take back to my church: young people can indeed move a lot, but they need support and empowerment.

The LWF participates in the 27th UN Climate Change Conference (COP27), which takes place in Sharm el-Sheikh, Egypt, from 6 to 18 November 2022. This engagement is part of the communion’s ongoing focus on strengthening climate action and advocacy at all levels. Young people are vital agents of change and form the greater part of the LWF’s delegation to COP27.