At the WCC 11th Assembly, LWF General Secretary Burghardt leads Lutherans from around the world in sharing their joys, concerns, and hopes, and reflecting on the assembly theme from a theological perspective. 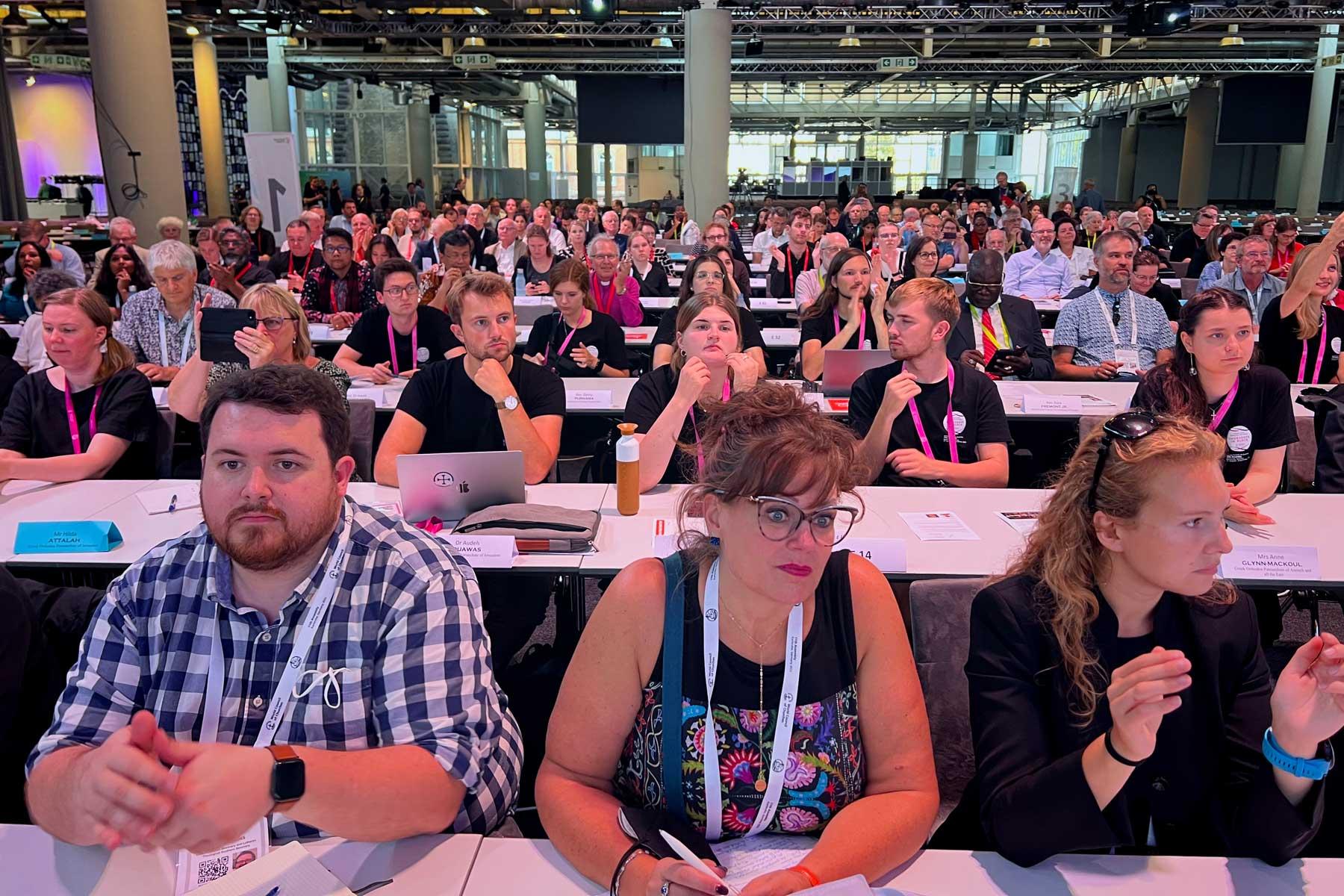 Reflecting together on joys, challenges, and mission in diverse contexts

Lutherans from churches all over the world came together for the meeting to share their joys, concerns, and hopes and reflect on the assembly theme from a perspective of Lutheran churches and theology.

"The LWF brings together the vast majority of Lutherans worldwide. Many of our member churches are represented at this assembly. Tonight, we have an opportunity to listen and learn from each other," added Burghardt, speaking to a full house. More than 500 delegates, participants, visitors and staff from Lutheran churches are at the WCC assembly. She moderated and led the meeting with Mr Dinesh Suna, coordinator of the WCC Ecumenical Water Network. 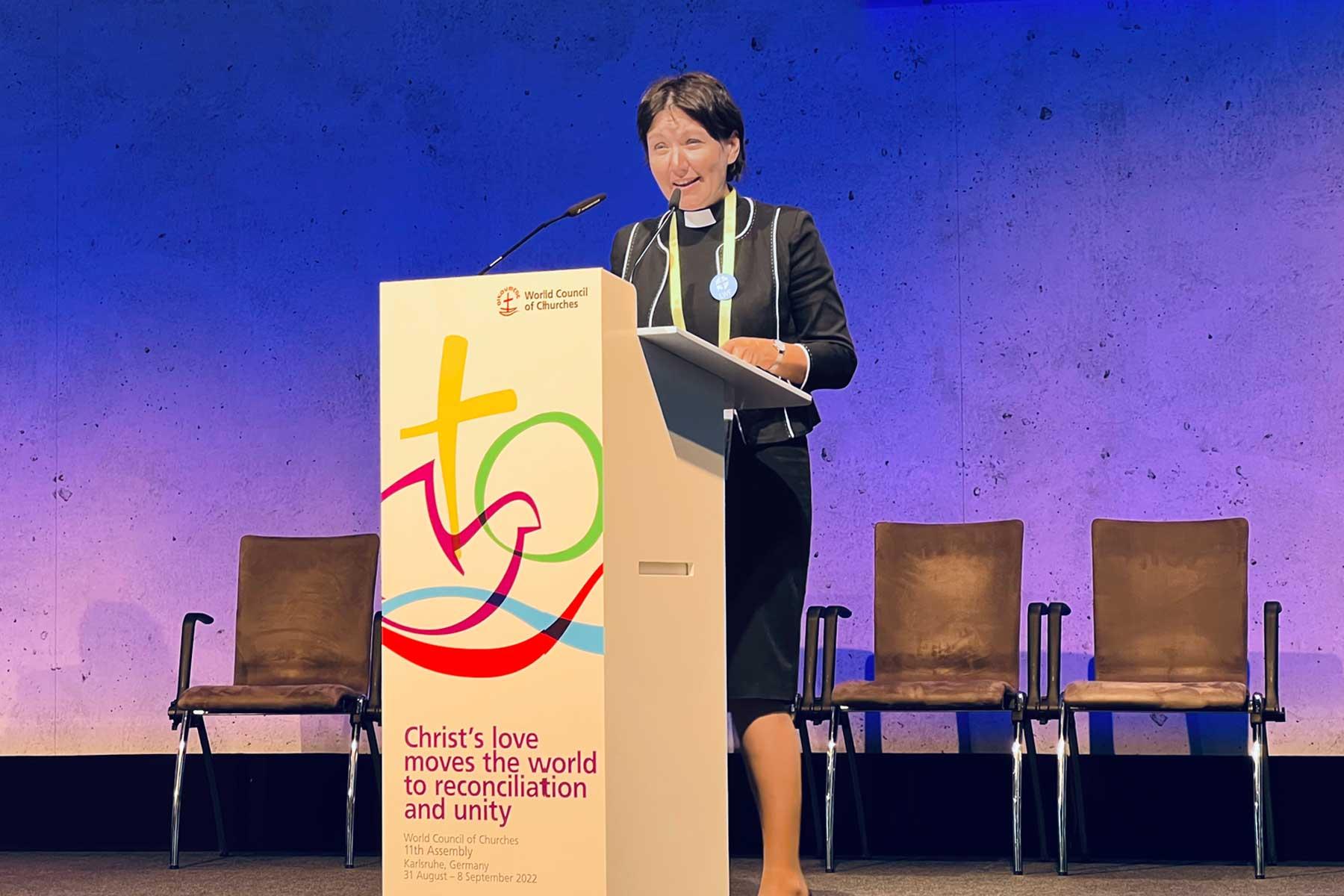 The LWF general secretary began by identifying three global challenges which affect the life and work of the churches and the contexts in which they offer their witness: firstly, the COVID-19 pandemic. It caused immense suffering while also ushering in a new era of online engagement for many churches; secondly, the rise of authoritarian and populist regimes, fundamentalism and nationalism; thirdly, the climate crisis and an ever urgent need to work for climate justice.

"While there are many challenges," Burghardt said, "we also see in our churches across the world, much goodwill and willingness to serve the neighbor. For us, that is a reason to be hopeful."

Vital role of churches and religions

Church leaders from all regions of the LWF, shared insights from their diverse contexts. Many of the churches are actively responding to local conflicts and supporting people in need. They are also engaged in diaconal work and advocacy for peace and reconciliation. The war in Ukraine and conflicts in other countries was discussed, with participants pointing out that while the former takes place in one region, it impacts the whole world.

Many churches offer their witness in a minority context. Ongoing advocacy is needed for freedom of religion and belief as well as for work to strengthen democracy which is threatened in many countries.

Theological education and religious education were identified as key concerns for many churches. It was also discussed how in some regions there is increased recognition of the vital role churches and religions play in society.

There was a strong affirmation of the full inclusion of women in the ordained ministry, a goal which the LWF member churches have been working resolutely towards since 1984. The role of youth in the churches was also discussed and a call issued for youth to be represented at the highest levels in the ecumenical movement.

Church leaders also affirmed the value of belonging to the LWF as a global communion of churches – "being part of the family of Lutherans."

The importance of strengthening the connections between global organizations like the WCC and LWF and their member churches was also affirmed. Such grassrooting can make it possible to mobilize church members for vital causes such as addressing climate change.

The theme of the WCC Assembly “is centered on Christ,” said general secretary Burghardt in conclusion. "It speaks strongly to what we see as the mission of the church in the world," namely that "we are called by Christ to witness and work for reconciliation in love." She invited participants to follow and join the upcoming LWF Assembly which will gather in Krakow, Poland, in September next year. “Just like the WCC assembly focuses on unity, we will have unity in focus when we gather Krakow under the theme 'One Body, One Spirit, One Hope.'”