“A defining moment for the church” 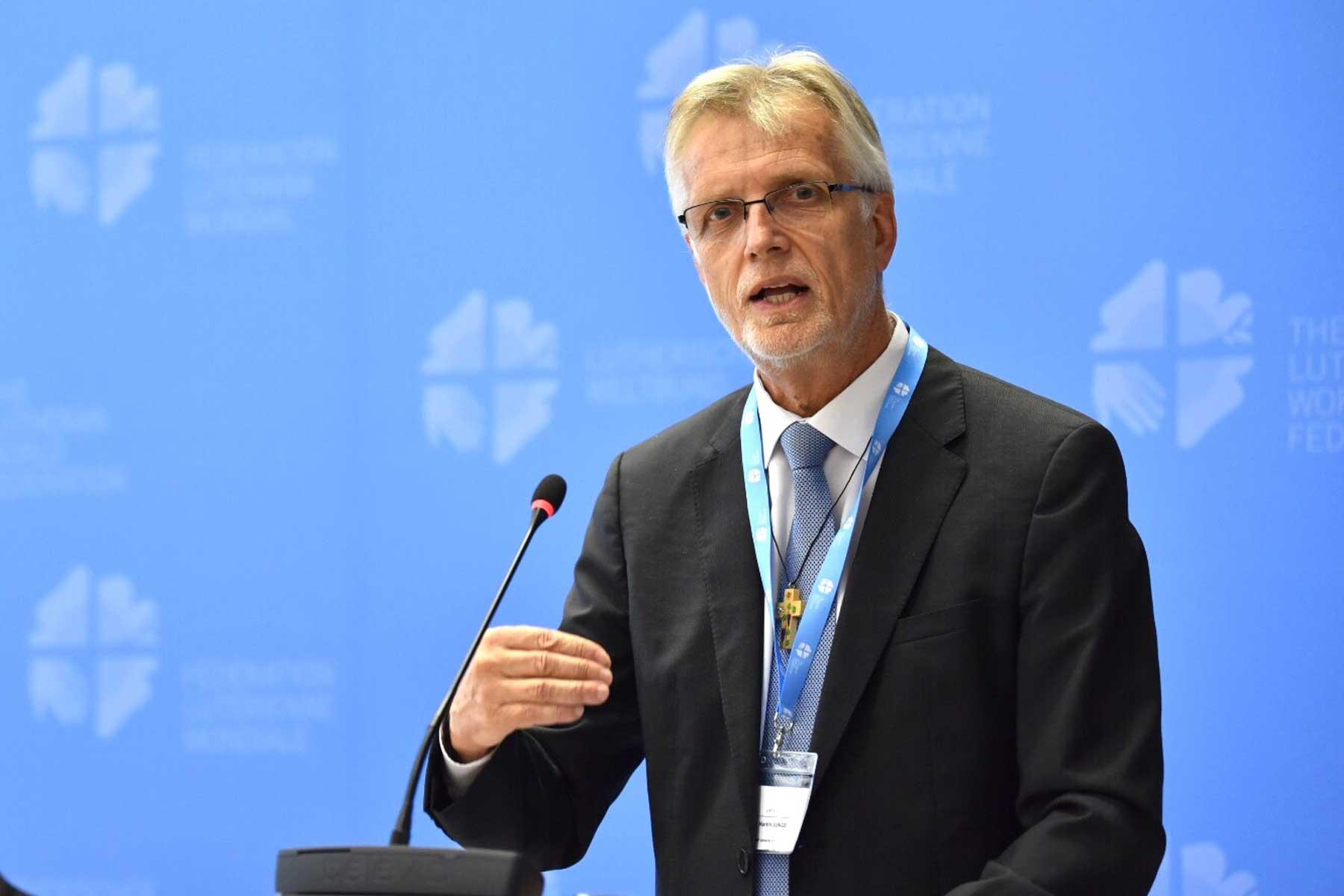 Report of the LWF General Secretary Martin Junge at the Council 2018 in Geneva. Photo: LWF/Albin Hillert

Report of the LWF General Secretary to the Council

LWI - In the coming years, the Lutheran World Federation (LWF) will work to further support member churches in their ministry and to strengthen the witness of the church in the world, LWF General Secretary Rev. Dr Martin Junge outlined this in his report to the LWF Council on 29 June in Geneva.

Among the topics he addressed was deeper engagement in climate justice, new networks for theological education, continued commitment to gender justice, youth engagement, and ecumenical relations, and a commitment to address the root causes of suffering while continuing to serve the needs of refugees and displaced people.

“We live in complex times”, General Secretary Junge said. “Many developments point at increasing polarization and fragmentation in the world and indeed also in the church.” Against this context churches are called to be voices of hope, he added.

The church is entrusted with the message of Christ: one of hope, that drives out fear; one of compassion that challenges indifference; one of justice that resists oppression; one of reconciliation that holds fast to peace-building.

“It is indeed a defining and challenging moment for the church. Yet, I couldn’t also think of a better time to be the church! Because the church is entrusted with the message of Christ: one of hope, that drives out fear; one of compassion that challenges indifference; one of justice that resists oppression; one of reconciliation that holds fast to peace-building. The church has a message that is so desperately needed today,” he said.

The LWF will also continue to build on the momentum of current ecumenical developments, fostering the ongoing dialogue with the Catholic, Anglican, Reformed, Mennonite, Pentecostal and Orthodox communion.

He also encouraged churches to include young people into decision-making on all levels in the churches, especially in endeavours talking about sustainability and revival of churches. “No generation should think and work toward the church it hopes to be leaving to the next generation, without reflecting together with that next generation,” he said.

He offered encouragement and support to an initiative of churches in Europe that are “working together, sharing good practices, reflecting together about the revival of the church.”

Prophetic voice of the churches

Junge acknowledged the difficulties current political trends of “polarization and fragmentation” pose to the churches. He encouraged LWF members to avoid the temptations of staying silent in the face of injustice out of fear or joining populist movements, allegedly to protect Christian identity of a church, country or region. He asked: “Would God really welcome being protected like this?”

Junge especially acknowledged member churches living in contexts of violence for keeping “up their voice calling for peace”.

Stronger than before, the LWF will address issues of climate justice, making it a priority to raise awareness and support churches in dealing with the consequences of climate change. “I believe that the LWF communion with its strong theological, diaconal, and advocacy commitments is uniquely positioned to make a huge difference as the human family grapples with the question of climate change and looks into how to tackle this challenge,” he said.

The LWF General Secretary especially highlighted the work of the LWF diaconal arm, World Service, as “active expression of God’s loving outreach to all humankind”. In the past year, through its engagement the LWF communion “directly reached out and touched the lives of more than three million people, most of them refugees and internally displaced people”. This number marks a new albeit sad record correlating to the unprecedented number of forcibly displaced people worldwide.

The LWF does not stop at tending to the victims of human suffering, but also addresses its root causes. A focus for the coming years will be to strengthen international initiatives and institutions. Last year, the LWF was called as one of few NGOs to participate in the development of the Global Compact on Refugees with the United Nations.

Referring to the defining time of being church, he reminded the Council that “we don’t know what the future holds for us, but we know who holds it for us.” He encouraged the communion to move forward “with a sense of gratitude for and confidence in God’s caring presence.” He urged to remain to hold fast to the “unbroken vision about this communion, rooted in Christ, living and working together for a just, peaceful, and reconciled world.”

Photos of the Council

The 2018 LWF Council meeting takes place in Geneva from 27 June - 2 July. The theme of the Council is “Freely you have received, freely give” (Matthew 10:8, NIV). The LWF Council meets yearly and is the highest authority of the LWF between assemblies. It consists of the President, the Chairperson of the Finance Committee, and 48 members from LWF member churches in seven regions.

The LWF Strategy in Bahasa Indonesia and Swahili
news
tt