Being Lutheran: Priesthood of all baptized 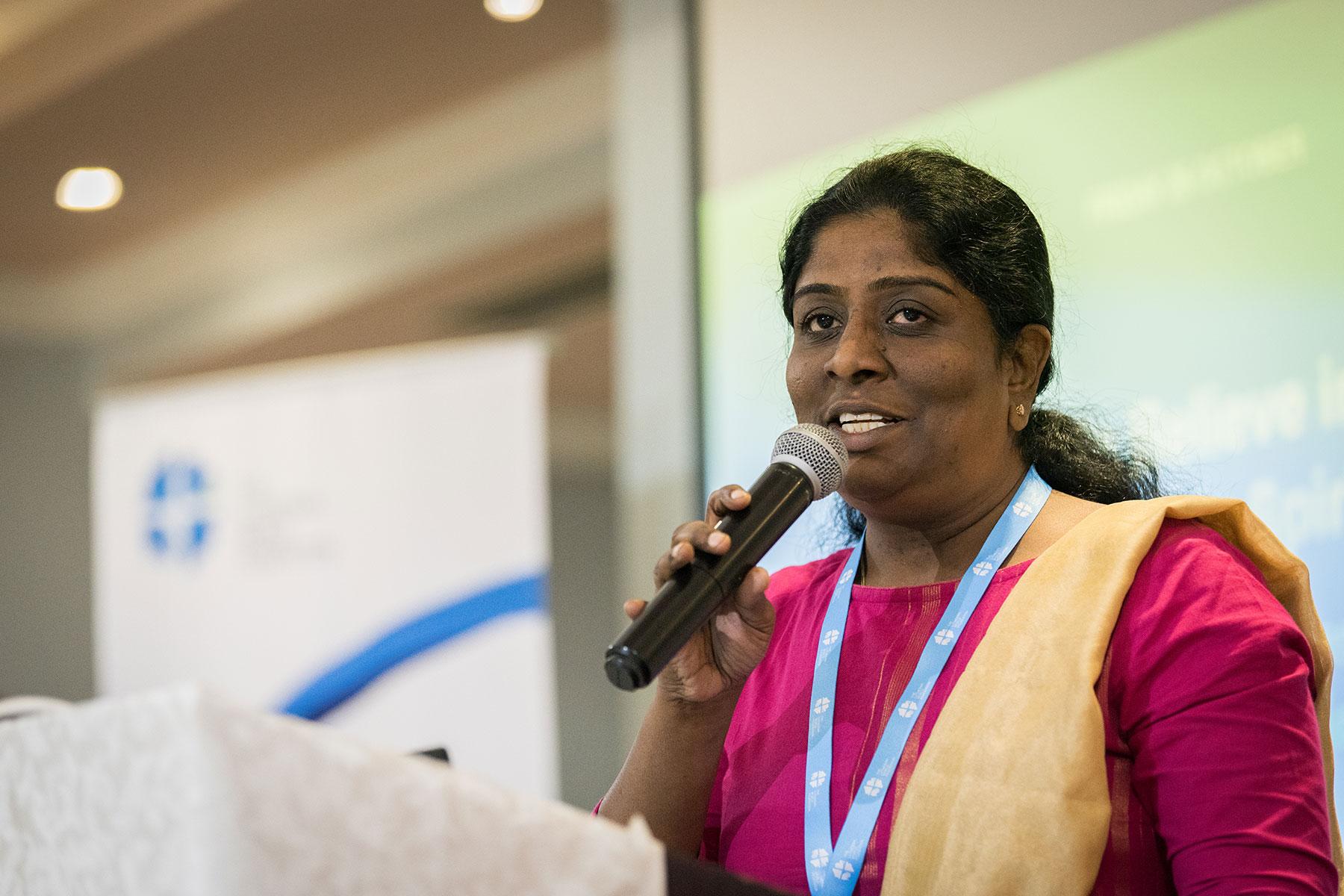 Rev. Caroline Christopher, from the Arcot Lutheran Church in India, leads a Bible study on 'freedom and fruit of the Spirit' at the global consultation on Lutheran Identities in Addis Ababa from 23 to 27 October 2019. Photo: LWF/Albin Hillert

(LWI) - What does belief in ‘the priesthood of all the baptized’ mean for Christians living in today’s secular or multi-religious societies? How does this doctrine, at the root of the Reformers’ agenda five hundred years ago, relate to contemporary relationships between church and state? How are Lutherans living out this call to holiness and participating in God’s mission of reconciliation in an increasingly polarized world?

Those questions were at the heart of a ‘Being Lutheran’ webinar on 4 November, the fifth in a monthly series bringing together theologians and others engaged in an ongoing study process to explore contemporary Lutheran identities. The webinar was moderated by the Lutheran World Federation’s Program Executive for Identity, Communion and Formation, Rev. Dr Chad Rimmer.

Rev. Caroline Christopher from the Arcot Lutheran Church in India was the featured speaker. She spoke about ways that the doctrine of the priesthood of all the baptized had a profound impact when the first Lutheran missionaries arrived in 18th century India. In the context of a rigid caste system of social stratification, Luther’s democratizing doctrine challenged not only the religious identity of the Brahmins – the Hindu priests and teachers – but also the socio-political structures that had underpinned people’s lives and livelihoods since ancient times.

In particular, she continued, this reform agenda had a great impact on the most marginalized communities of Dalits, originally known as ‘untouchables’ and considered to be outside the traditional caste system. Most of these Dalits and Adivasis, India’s indigenous ethnic minority communities, are still “deprived of everything,” she said, including healthcare, education, political representation and participation in religious life.

Rev. Christopher explained how those early missionaries “wanted to bring justice,” alongside the new doctrinal belief that all baptized people have direct access to God’s mercy and do not need a priest as mediator. “They taught the bible to the uneducated through stories and songs,” she said, adding that “this work continues in church and society” to empower Dalits and other impoverished communities. Christian ministry among indigenous peoples is increasingly contested by Hindu leaders spearheading a movement “to get people to come back to the mother religion,” she said.

Today, Rev Christopher noted, Lutheran churches in India include around 90 percent of Dalit people, yet the work for a true ‘democratization of the Spirit’ continues to provoke resistance from those who are nostalgic for a more rigid hierarchical system. In her own Arcot Lutheran Church, she said, lay people are often in charge of the teams that travel to marginalized communities to share the gospel message, but “there are other churches that don’t allow lay people to take responsibilities.”

In a cultural context where concepts of “purity and pollution” continue to shape attitudes towards women, Rev. Christopher said there are many Indian churches where women are still excluded from the ministries of the Word and Sacrament. There is “a big debate going on” in all of India’s religious communities, she added, and “women are struggling and studying so emerging, but there is still a long way to go.”

Another contemporary challenge for Lutherans in India and elsewhere is the belief that true holiness of all believers is only to be found within the evangelical churches. “Mainline churches are considered to be lacking” in spirituality, Rev. Christopher acknowledged, and it is “really challenging to make them see the spiritual gifts in themselves.”

Rev. Christopher also shared her experience of working as manager of a large hostel for students in Chennai, providing “a safe place to stay” for many orphans, single mothers and destitute women from different religious backgrounds. In discussions that followed her presentation, participants reflected on the importance of such “prophetic diakonia” as a hallmark of Lutheran witness within secular or multi-faith societies.

The priesthood of the baptized is a radical idea that reframes the way we understand power, and feel empowered to participate in transformation.

Participants remarked that faithful acts of love in daily life may be the only sign of the church that people ever experience. Rev. Dr. Chad Rimmer said: “The priesthood of the baptized is a radical idea that reframes the way we understand power, and feel empowered to participate in transformation. It is a way of saying no matter what your occupation or passion in life, the Spirit equips you to share Christ’s love in every sector of society.”

Rimmer concluded: “This webinar took place 500 years from the day Luther published his treatise on the Freedom of a Christian. It describes God's love as a gift that liberates us from bonds of injustice, and a call that compels us to serve our neighbor in economic, social, religious, political and I’ll add, ecological spheres.”

See all the Being Lutheran - webinar series videos

The next Being Lutheran webinar will take place on Wednesday 2 December on the theme of ‘Discerning the Spirits of our Age’. Further details and registration here.

Asia: Building resilience and hope to weather the storm
news