How can feminist and ecological perspectives help to build better economic models? Why should we listen more closely to the wisdom of indigenous communities? Hear from one participant at the recent GEM School for an Economy of Life. 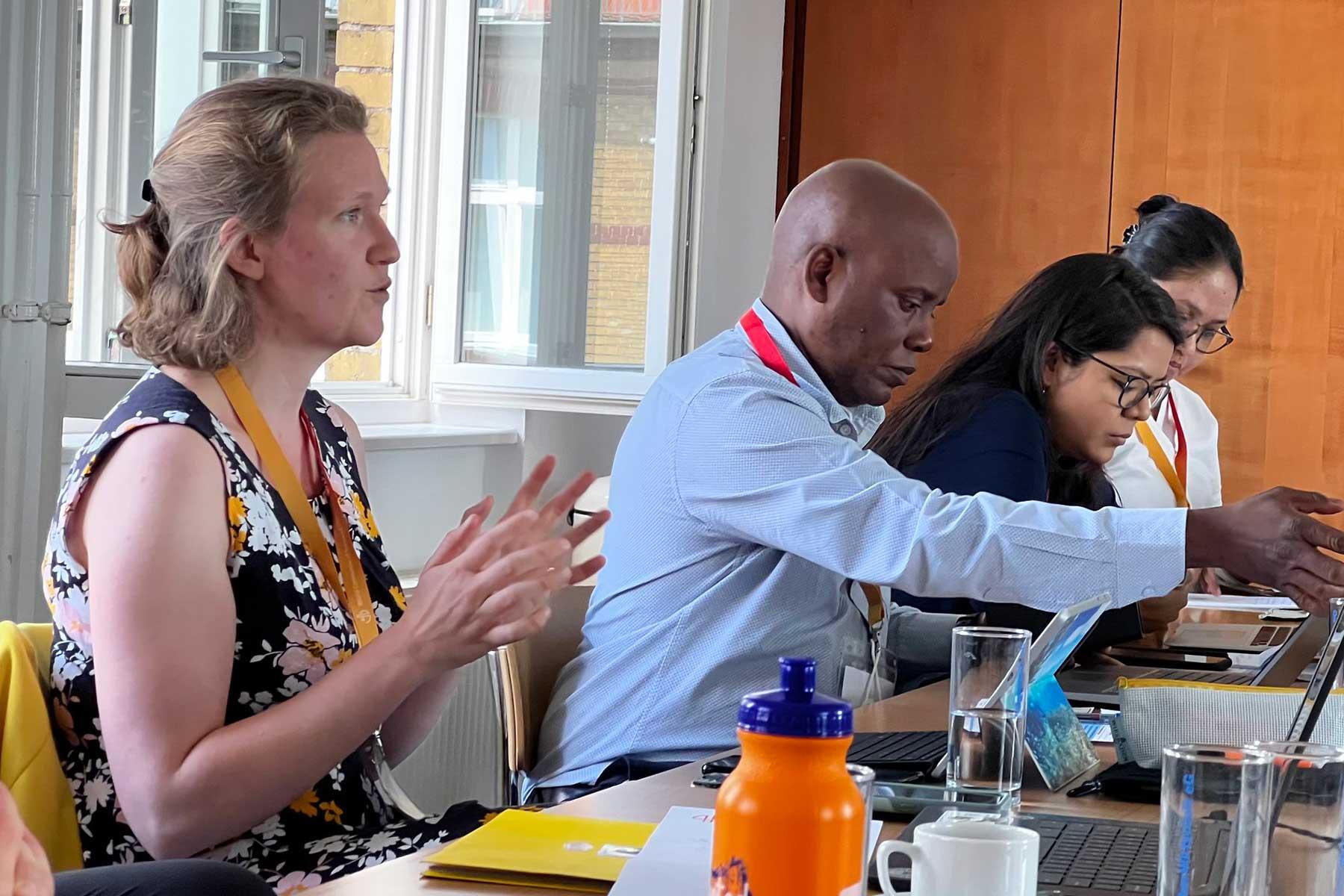 Helena Funk from the Evangelical Lutheran Church of Saxony at the GEM School for an Economy of Life in Berlin. Photo: LWF/S. Kit

Reflections on 2022 GEM School for an Economy of Life

Some 30 highly motivated people of all ages and nationalities, representing different Christian denominations, met in Berlin in the first week of July for in-depth discussions on economics, government and management models. All of us, both lay and ordained, had been selected to participate in the GEM School (Governance, Economics and Management) for an Economy of Life. It was a huge privilege for me to be chosen to take part in this unique school in a unique location. Due to the pandemic, it had been postponed several times, hence it was a very intense experience to finally meet together in person.

The core context was the NIFEA project (New International Financial and Economic Architecture) focusing on different facets of this ecumenical framework. Alongside mainstream or neo-classical economics, we explored underrepresented economic approaches and discussed them from a theological point of view. Through bible studies and devotions, we started each day with a theological reflection and discussion based on different bible stories related to economics.

The venue of the GEM School was particularly significant. We met at the WeiberWirtschaft, home to Europe’s largest women’s cooperative and a Berlin hub for female start-ups, where one of their speakers introduced us to the concepts of a feminist economy. We were particularly inspired by the idea that economics should not only be about formal and paid work, but rather needs to shift to take into account more informal and especially care work. This work is often done by women who do not get paid for housework or raising children. Consequently, a country’s Gross Domestic Income (GDI) and all other economic calculations are not accurate. In order to gain more justice globally and to close the gender gaps, our economies, as well as our economic models, should shift towards a care-based approach.

One economic theory which follows this approach is the de-growth theory that values time and care similarly to formal work and calls for de-growth in economics to ensure sustainable living worldwide. Both approaches have in common that they challenge the so-called ‘Mushroom Man’ or 'homo oeconomicus’, an economical model of a man who always acts out of self-interest. For me, this feministic perspective on the economy was enriching as it pointed out where weakness can be found in existing neo-classical economics models and at the same time gave concrete ideas on how to shift the economic narrative.

Another aspect that appealed to me was the ecological perspective on the economy. This theory argues for an economy that recognizes the planet’s limited resources, that takes into account climate change, exploitation of our natural resources and the effects of the economy on the environment. During this session it was very moving for me to hear fellow Christians talk about their communities and how economic-related harm to the environment also impacts their lives. We heard from South Africa, for example, about fracking and its consequences for local people.

A participant from an indigenous community in Indonesia also shared her experience and, for me, it was a real wake-up call to hear how her local community is already suffering dramatically from climate change and has had to move due to the extraction of resources. At the same time, she explained how our (Western) concepts of climate change and ecological justice are harmful to some indigenous communities, as our narrative and framework is not inclusive of them.

I learned that the translation of concepts is very challenging for them: what if there is no word in a local language to translate “environment” as their view of the world already implies a holistic understanding of nature? How can you impose another view on them? Isn’t it better that we should listen more carefully to local indigenous communities, learn from their concepts and apply them to our understanding instead? To embrace a holistic model of nature, including humans, resources and animals, instead of imposing our Western eco-economic models? What if there is no Mushroom Man, as people do not see growth or individual opportunity as their main motivation?

For these lessons, the setting of the GEM School was a unique one, as it offered us the chance to interact and discuss with people from contexts that I would not meet in my everyday working life. And yes, it does make a huge difference to talk to someone who is sharing about his or her life, rather than reading about it in an article.

Returning to my local church

One of the main goals of the GEM School, alongside discussion and learning about economics and theology, is to share this newly gained knowledge and apply it in one’s own context. Working with the Evangelical Lutheran Church of Saxony, my project is to design a 90-minute workshop that connects these different narratives and combines theological reflection with a call for economic justice. I plan to conduct my workshop within local church communities.

I think in my context it is important to produce an interactive workshop which is grounded in a bible study but also bridges activism with a faith perspective. It will include some theoretical background, but will also broaden out and invite individuals to think how they can make an impact within their everyday lives. I sense that, in my context, narratives are important to make people interested and open to this topic.

Other participants’ projects are about research, advocacy and community initiatives. Thus, a huge variety of projects have been presented and will start to develop over the coming months. I hope all of them will challenge the Mushroom Man of pure neo-classical economics and add vital perspectives of feminist and ecological economies.

Freed for the freedom to do that which is loving
blog