Canada: Decolonizing and investing in reconciliation is the best climate justice action 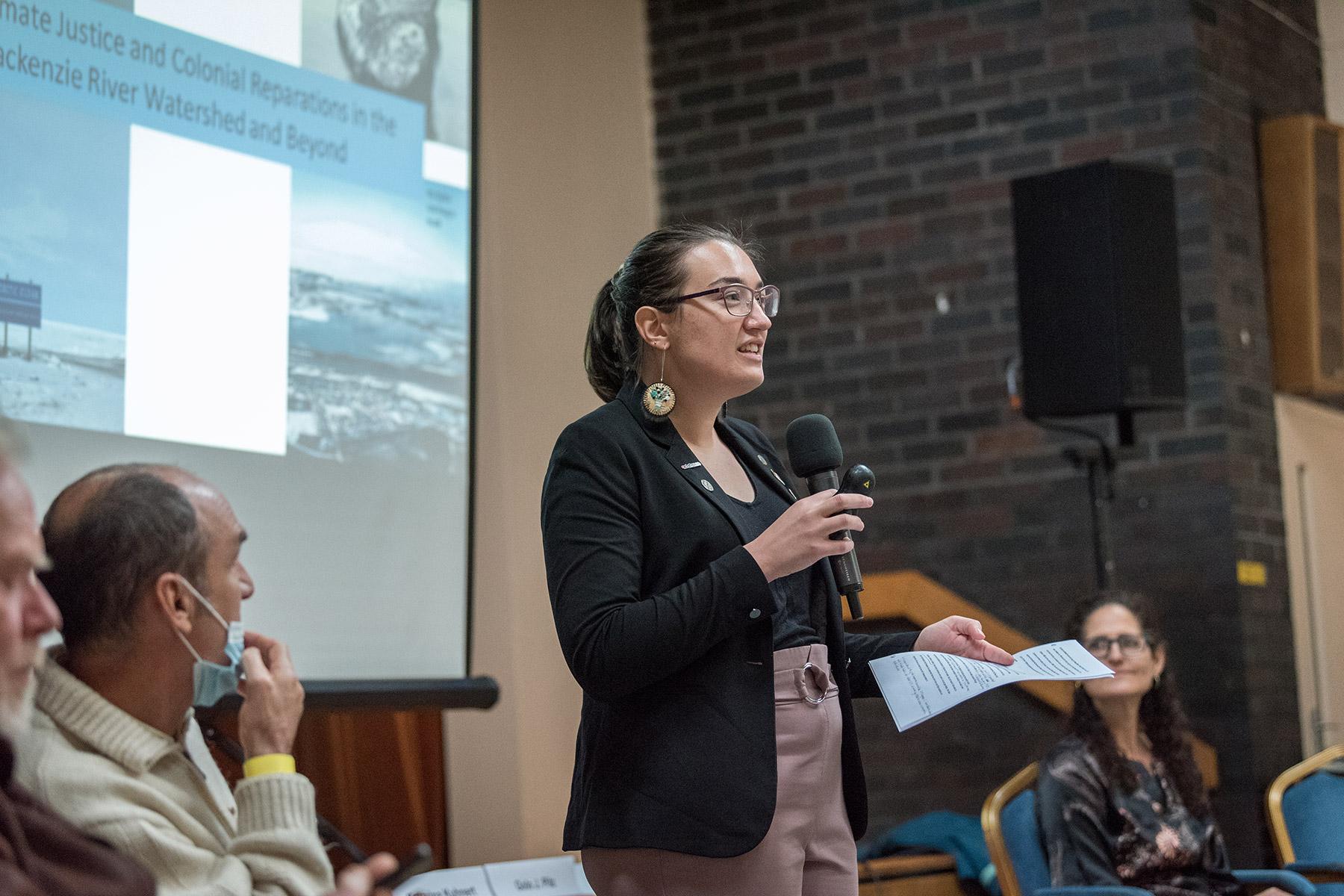 After attending the UN climate conference COP26 in Glasgow, Scotland, I fly back to my home north of the Arctic Circle in Inuvik, Northwest Territories, Canada. Our plane soars through Northern Alberta, passing loosely over one of the largest industrial projects in the world. Canada’s oil sands are the world’s third-largest proven oil reserve, with over 166 billion barrels of oil. Two hundred forty-three billion dollars have been invested in this industry. The government subsidizes it with hundreds of millions of dollars every year and registered lobbyists from the oil and gas industry as part of the Canadian country delegation to COP26.

When colonizers from England and France, including my ancestors, first arrived in Canada in the 1500s and 1600s, they saw a land thoughtfully tended by a diversity of Indigenous nations. The colonists created a governance system intended to expropriate Indigenous lands for extractive industries to profit from this abundance.

Christian churches often provided the moral and legal philosophy that bolstered this system and enabled the forcible extraction of Indigenous peoples off their lands. As a result of the subsequent resource development, Canada has become one of the highest per-capita greenhouse gas emitters globally. The Christian church was instrumental to the foundation of ongoing colonial occupation, which caused the conditions for our current climate crisis.

In 2015, the Truth and Reconciliation Commission of Canada concluded its mandate to inform Canadians about our government and churches’ abuses against Indigenous peoples. These findings were published in their final report, “Honouring the Truth, Reconciling for the Future”.

In 2015, the Evangelical Lutheran Church in Canada (ELCIC) passed the Resolution on the Doctrine of Discovery, repudiating and renouncing it as fundamentally opposed to the gospel and our understanding of inherent rights and dignities received from God. We confessed that these patterns of domination and oppression of land and environment continue today. We committed to entering into renewed relationships with Indigenous nations and their lands.

In 2015, the ELCIC signed our Resolution on Climate Justice. This caused us to take direct actions: divesting from fossil fuels, working towards becoming Carbon Neutral by 2050, encouraging churches to become Greening Faith Communities, reducing single-use plastics, and engaging with LandBack movements to get Indigenous lands back into Indigenous hands.

In 2015, the Paris Agreement was developed at COP21. The ELCIC called on the Canadian Government to reduce greenhouse gas emissions, invest in a just transition to a green economy, and honor the rights of Indigenous peoples.

2015 was a big year for both Indigenous rights and climate action. This is not a coincidence. Climate justice on Indigenous lands is necessarily intertwined with the rights of Indigenous peoples. Climate action looks like support for Indigenous sovereignty, self-determination, and repatriation of lands. Decolonization is not a metaphor. For church members, decolonizing means rejecting doctrines that justify the colonial occupation of land in the name of extractive industries that exacerbate the current climate emergency. An anti-colonial approach to climate justice rejects colonial capitalism and the dispossession of Indigenous peoples off their ancestral lands for corporate extractivism. It embraces the land from a position of right relationships with Indigenous peoples, each other, and ourselves. Decolonization is vital as a refusal to replicate systems of oppression and domination within the green economy and governance systems that we are uplifting as alternatives to non-renewable exploitation.

In parallel with decolonizing, investing in reconciliation is the best climate justice action our church has a part in. However, true reconciliation cannot be achieved without upholding Indigenous self-determination. According to Article 3 of the United Nations Declaration on the Rights of Indigenous Peoples, which received Royal Assent into Canadian law on June 21, 2021, “Indigenous peoples have the right to self-determination. By virtue of that right they freely determine their political status and freely pursue their economic, social and cultural development”. Indigenous communities are leading our country in energy transition and climate action within their governance systems on their ancestral lands, which they have taken care of since time immemorial. Yet this leadership is insufficiently reflected in our national governance, as the Canadian government is not structured to uplift and represent the knowledges and ontologies of Indigenous communities.

This dynamic was reflected at COP26, where the overwhelming representation of fossil fuel lobbyists sparked a walkout of observers from the conference proceedings, led by Indigenous peoples. One of these leaders was Ta’Kaiya Blaney, from the Tla’amin Nation of the Salish Sea on the West Coast of what we would call Canada, representing the Indigenous Caucus at the People’s Plenary closing session. Blaney said that “climate change is not a blameless phenomenon” and that the Canadian government, state police, and oil companies are the “architects of climate change” while criminalizing Indigenous peoples who fight climate change and land dispossession by opposing extractive industries. For Canada to have a just energy transition from our fossil fuel-dependent economy, we must fundamentally restructure our systems of governance, our economies, and our relationships with sovereign Indigenous nations on their ancestral lands.

I commend The Lutheran World Federation (LWF) communion to look to Indigenous-led climate organizations and communities for stewardship in action towards carbon neutrality, right relations with the natural world, and sustainable lifestyles based on mutual reciprocity with the goodness of Creation. I call on member churches to consider how a commitment to climate action necessitates decolonizing, in the literal sense of rejecting the expropriation of Indigenous lands for resource extraction and upholding Indigenous self-determination on their traditional territories, in Canada and around the world.

Katarina Kuhnert, age 24, is a non-Indigenous Canadian from the Evangelical Lutheran Church in Canada (ELCIC). Kuhnert was one of 30 young people representing the LWF at the UN climate conference COP26 in November 2021. She contributed to a side event titled “Energy Transition – Deciding Our Future” by the COP26 Coalition, a coalition of civil society actors mobilizing around climate justice during COP26. Kuhnert is an early career climate scientist living in Inuvik Northwest Territories on the traditional Indigenous territories of the Inuvialuit, Gwich’in, and Northern Metis peoples. She is also the ELCIC representative on the Partnership and Rights Circle of KAIROS.